Gold may be grabbing the headlines with its best year-to-date performance in decades and silver's 48% surge in 2016 to above $20 an ounce is a big swing even for such a volatile metal, but this year's rally in commodities is broad-based and becoming more so.
After under performing gold in 2016, platinum has now overtaken the yellow metal with a year to date advance of a shade under 34%. A  chunk of those gains came in July, the metal's best monthly performance since 2012. Sister metal palladium has also enjoyed its best month for nearly a decade, soaring 21.1% in July. With a 52% or $250 an ounce gain from trough to peak in 2016, palladium is now even besting silver.
Thermal coal is probably the biggest upset – seaborne prices are up 22% in 2016 to above $60 a tonne with most of those gains coming in recent weeks

Base metals have also enjoyed a breakout 2016 with across the board gains year-to-date. Measured from recent lows which mostly occurred at the end of 2015 and in January and February this year the recovery in prices this year is even more impressive.
One of the few decliners until recently, lead is still a laggard but now boasts a 2.7% rise in 2016 scaling $1,800 a tonne in July. Bellwether copper has also been lack luster adding only 3.3% in 2016 as it remains stuck below $5,000 a tonne, but elsewhere in the complex prices are in rapid advance.
Aluminum and cobalt, both up 9.4% so far this year haven't enjoyed the spectacular gains of the likes of likes of zinc (+40% to $2,275 a tonne) and tin (+24% just short of $18,000), but like nickel (+24%) which regained the $10,000 a tonne level in May, the metals could play catch up over the remainder of the year as Chinese demand picks up steam.
Steel making raw materials iron ore (+41% to top $60 a tonne on Monday) and coking coal (+29% and back in triple digits) have also come back strongly despite all predictions. Thermal coal is probably the biggest upset – seaborne prices are up 22% in 2016 to above $60 a tonne with most of those gains coming in recent weeks as a domestic clampdown by Beijing opens up opportunities for exporters.
Oil dipped below $40 a barrel today as the 2016 rally comes off the boil, but the commodity is still up more than 50% from its February low. Potash at levels not seen since 2007 and uranium languishing around $25 with few signs of improvement appear to be the exceptions that prove the rule for mined commodities this year. 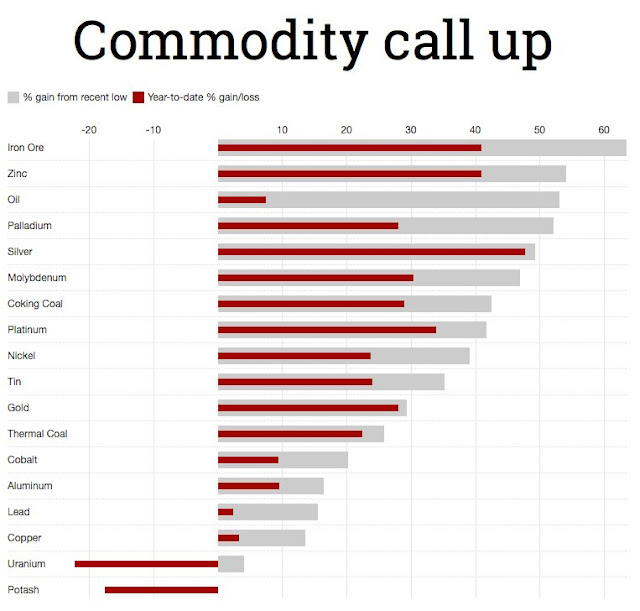