What would Halloween be without a scary chart of The Stock Market That Cannot Die? We know the stock market cannot die because we’re constantly told it’s immortal: 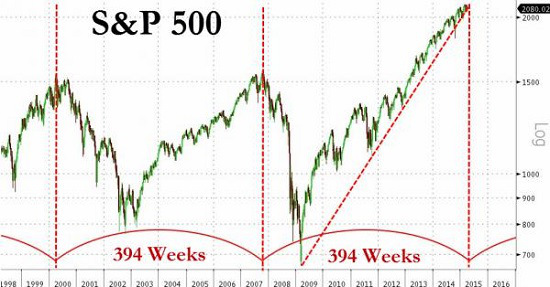 You know the drill: the Federal Reserve will never let the market fall, never, never, never: it will continue to loft higher for all time, in immortal glory.
Like a blood-sucking vampire, the market is parasitically feeding off the real economy. As the host weakens, the parasite increases its control. Now the market is telling the real economy: if I die, you die, too.
The entire Status Quo is now utterly dependent on a rising stock market: not just for the illusion of the wealth effect, but for tax revenues, pension fund stability, and the fantasy that a rising market is a substitute for a healthy economy.
It’s terribly frightening to be in thrall to a parasite that will bleed its host dry to maintain itself. But that’s not the scariest possibility.
The scariest possibility is that the stock market will fall despite all the promises that its advance is immortal.
If this were to happen, all those “safe” index funds would implode along with the broad market.

"Most Overbought" In 11 Months

The last time S&P 500 rallied at such a pace (from an extreme of oversoldness) and reached such an extreme level of overboughtness, things went south rather quickly...
Posted by Unknown at 11:06 AM