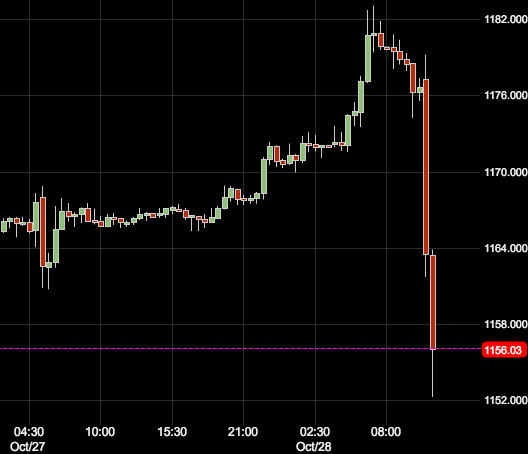 Spooked by Federal Reserve's hawkish stance, hedge funds start liquidating 345 tonnes worth of bullish gold futures positions
Yesterday on the Comex market in New York, gold futures with December delivery dates fell more than $30 an ounce from where it trading just before the Federal Reserve's interest rate announcement. By the end of the day gold had clawed back some of those losses, but on Thursday the metal was being sold off again.
Late afternoon Thursday gold was exchanging hands for $1,145.10 – down more than 3% from $1,183.50 ahead of the Fed statement and a three week low. Higher interest rates boost the value of the dollar and makes gold less attractive as an investment because the metal is not yield-producing.
While the Fed decided to keep interest rates unchanged it changed the language in the statement to suggest a hike in December is more likely. The market had begun to price in an increase only in March 2016 and gold bulls were forced into a retreat.

Failure to hold this level would attract some additional long liquidation as a break below $1,140 could signal a reversal of sentiment

The Fed voted 9 to 1 to leave rates in a range of zero and 0.25% where they have been since December 2008. Interest rates in the world's largest economy has not been raised in more than nine years which played a huge factor in gold's rise to a record $1,909 in September 2011.

Gold hit its highest level since June 22 a fortnight ago, amid fresh indications that a limp US economy may push a rate hike further into the future, but that narrative now seems to no longer apply.
On the technical front gold is also looking vulnerable.
Hedge funds reduced bullish bets to more than five year lows ahead of the September Fed decision, but the hold on rates then forced a change of thinking with large futures speculators or "managed money" playing catch-up as the sentiment towards gold turned.
Hedge funds built up net long positions – bets that gold will be more expensive in future – for five weeks in a row, tripling holdings over the past month.
Last week the  CFTC's weekly Commitment of Traders data showed net longs now stand at 12.2 million ounces (345 tonnes), the highest since February.
That constituted a huge reversal from July and early August when hedge funds entered net short positions for the first time since at least 2006, when the Commodity Futures Trading Commission first began tracking the data.
Ole Hansen, head of commodity strategy at Danish bank Saxo says after yesterday's abrupt reversal the price of gold has so far managed to stay above the next level of support at $1,148 an ounce (only just), but "failure to hold this level would attract some additional long liquidation as a break below $1,140 an ounce could signal a reversal of sentiment": 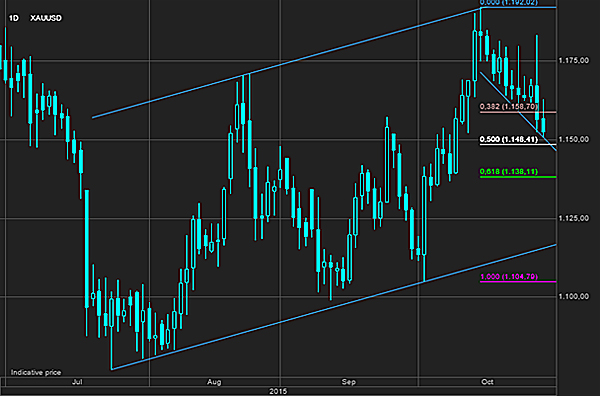