India's gold imports crashed 95% in August to just 2.5 tonne from month before, easing pressure on policymakers as they struggle to contain the depreciation of the rupee while addressing an elevated current account deficit (CAD). 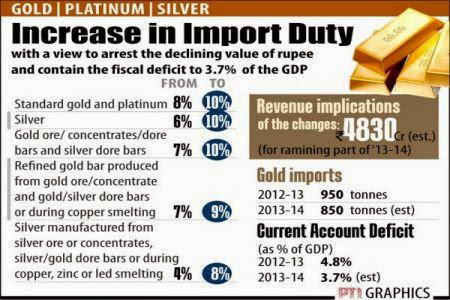 India's gold imports crashed 95% in August to just 2.5 tonne from month before, easing pressure on policymakers as they struggle to contain the depreciation of the rupee while addressing an elevated current account deficit (CAD).
Bullion industry executives said gold purchases from abroad tumbled last month as lack of clarity on recent central bank guidelines on imports, coupled with an absence of festivals, curbed demand from jewellers in the world’s top consumer.
The imports last month slumped from 47.5 tonne in July, 31.5 tonne in June, 162 tonne in May and 142.50 tonne in April, according to official data.
The government aims to reduce the CAD from $88 billion, or 4.8% of the gross domestic product (GDP), last fiscal to $70 billion, or 3.7% of the GDP, in 2013-14, and is desperately attempting to curb non-essential imports, including those of gold, to achieve the target.
Compounding the government’s worry, the rupee has depreciated by more than 20% so far this fiscal.
Gold imports stopped after July 22 due to confusion over a rule issued by the Reserve Bank of India, which required importers to re-export at least 20% of all the purchases from overseas, and jewellers started using stocks that had piled up in April and May following record imports of 304.5 tonne.
Although the RBI rule was aimed at curbing the flow of gold into the country and not to stop it, the importing agencies took time to get a grasp on the many operational procedures involved, including the undertaking that needs to be submitted to the customs department once the goods are delivered to an exporter for the next lot of imports.
On August 14, the central bank clarified on the operational part of its gold import norms issued in July following which traders started firming up deals.
Last week, the customs authority also explained the changes in sync with the RBI notification.
Imports may again rise to around 30 tonne in September, as jewellers usually start building inventory to cater to the requirement during the festival and marriage season from October, said a senior executive with the Bombay Bullion association.
Although imports may rise, the pace of growth will remain subdued compared with a year earlier due to the government crackdown on overseas purchases, said Sanjeev Agrawal, chief executive, Gitanjali Export Corporation.
Posted by Unknown at 10:16 AM