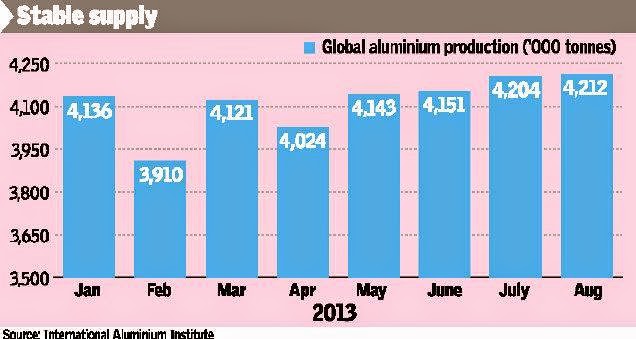 A supply glut amid continued sluggishness in the global economy continues to depress prices of aluminium. The metal is currently trading at $1,836 a tonne on the London Metal Exchange.
Even production cuts by major global companies have failed to prop up aluminium prices, with a dip in automobile purchases primarily responsible for capping demand worldwide. Any recovery will hinge on an upswing in the global economy’s fortunes.

Primary aluminium prices had touched an all-time high of $3,271.3 a tonne in November 2008, but crumbled to a five-year low of $1,251.8 a tonne by February 2009 as the global economic recession battered commodity prices.
Aluminium made a recovery in subsequent years, clawing its way back to 2,758.75/tonne in April 2011. But prices began to stagnate once again on demand concerns as the Euro Zone sunk deeper into an economic quagmire and the US growth engine struggled to break out of its inertia. Demand concerns have been further compounded by the slowdown in China. The metal has lost 34 per cent since that recent peak and is down 10 per cent this year so far.
In contrast, spot aluminium prices on the MCX have risen by 0.1 per cent in 2013 to Rs 111.90/kg. This can be primarily attributed to a sharp spike in aluminium prices in August, with the metal surging by 17.9 per cent during the course of the month to Rs 124.9/kg, its highest level since 2008. This can be attributed to an uptick in demand from the automobile sector, which has reported record passenger vehicle and two-wheeler sales in September.
Nevertheless, investors should view this burst as an anomaly, rather than a concrete direction for aluminium prices, especially since aluminium has lost 11.1 per cent since that five-year peak in just a matter of two months. 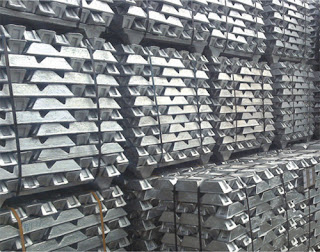 Aluminium smelters globally are expected to operate at 84 per cent capacity this year, with production pegged at 47.6 million tonnes against capacity of 56.9 mt a year.
This translates into greater curtailment of production than in 2012, when smelters operated at 86 per cent capacity. Production stood at about 46.2 mt in 2012, against operational capacities of 54 mt a year. In addition to primary aluminium, recycled metal accounts for around one-third of global consumption.
Demand is expected to rise to 49.4 mt this year, a 7 per cent growth compared with last year, according to a projection made by aluminium giant Alcoa. Most of the demand will come from China, the world’s biggest consumer, which is projected to witness 11 per cent growth in consumption to 23 mt, despite the slowdown.
At the same time, China is on its way to becoming self-sufficient in aluminium. In such a situation, it may limit itself to strategic imports of aluminium, thanks to massive capacities built at home. However, it will continue to rely on overseas suppliers for its bauxite requirement.

Among the other top aluminium consuming regions, Indian demand is expected to rise by 7 per cent to 3.8 mt this year. The country’s aluminium industry comprises four primary producers, namely Hindalco, Nalco, Balco and Vedanta Aluminium. The cumulative capacity of these firms amounts to around 1.6 mt.
Demand from Europe, on the other hand, is expected to decline by 1 per cent to 6.5 mt, even as consumption from North America is projected to rise by 4 per cent to 6.2 mt.
Posted by Unknown at 4:21 PM