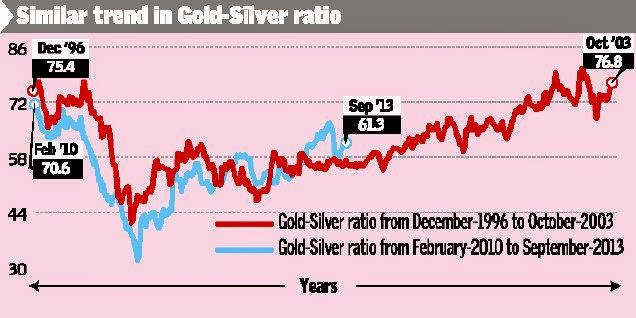 In general, both gold and silver move in the same direction. The percentage of decline in gold is typically lower than that of silver, and thus the ratio could increase faster due to larger price difference between the two metals. Hence the movement of the gold-silver ratio is inverse to the movement in gold and silver prices. That is, when price of gold and silver decline, this ratio increases and vice versa. When bullion prices decline, the gold-silver ratio increases faster due to heightened volatility in declines causing larger price moves. On the other hand, lower volatility in rallies could lead to lower difference between gold and silver prices, resulting in slower decline in the ratio.
Historical study of the movement of this ratio from a trough to a peak and vice versa since 1973 shows that, 60 per cent of the time, a sharp rise in the ratio is caused by a sharp fall in the price of gold and silver. Similarly, 67 per cent of the time a sharp rise in the gold and silver price has dragged the ratio lower.
The gold-silver ratio bottomed near 31 in April 2011. The ratio is on the up move since then and is currently at 61.35, which is just above its important resistance level at 61. As long as the ratio remains above 61, there is a high probability of a rise to 70-72. It is interesting to note that the movement of the gold-silver ratio from July 2009 till now is almost following the same trajectory of the ratio from December 1996 to June 2003. Hence, the ratio currently tracking the same path, can revisit 80 levels in the coming months..
Now, what does this mean for the gold and silver prices? Gold, after recovering from the low of $1,180 has failed to rise past its resistance at $1,450 and is declining once again. Similarly, silver is coming down now after testing its important resistance at $25. This pull-back keeps the overall outlook bearish for both gold and silver prices. If gold falls to $1,100-1,080 levels and silver falls to $15 levels, then the gold silver ratio will move up to the initial target zone of 70-72.
Posted by Unknown at 6:00 PM