Coal Prices To Remain Under Pressure. 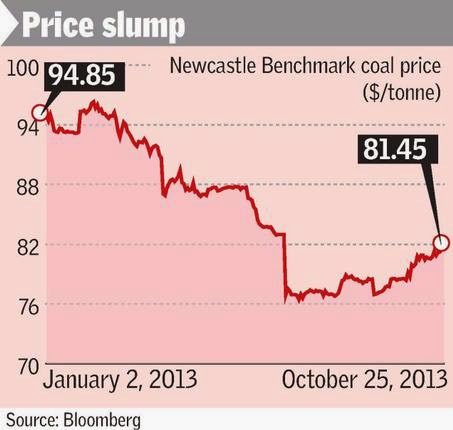 A prolonged oversupply situation in global coal markets has led to Newcastle benchmark prices of the dry fuel crashing by 13.1 per cent to $81.45 a tonne in 2013. This is below their five-year average of $95.22/tonne. Prices are now expected to increase in the near-term as production cuts by key miners begin to take effect.
Newcastle coal prices, after hitting this year low of $76.45/tonne on July 10, have risen 6.5 per cent since then. Despite the increase, most producers lament that margins have been hurt by rising input costs, motivating them to slash output to constrict supply. Newcastle benchmark coal prices had peaked at $139.05/tonne on January 10, 2011, but are now down 41.4 per cent from that record level.
Nevertheless, any upward movement in prices is likely to be limited. Coupled with concerns over slowing import demand from China, reduced imports by Indian buyers who have been keen to renegotiate contracts with key supplier Indonesia following a 17 per cent decline in the rupee during the year, continue to exert pressure on coal.

Indonesian suppliers have been able to resist Indian consumers’ demands for better prices by selling their coal in the spot market. Regulation passed by the Indonesian government in 2011 forbids coal firms from exporting their produce at rates lower than international benchmarks, hurting a slew of Indian companies looking to source cheaper coal.
Whether this strategy can be sustained hinges on a revival in demand. India accounts for a fifth of Indonesia’s coal exports, and the South-East Asian country recently trimmed its production estimates for the current calendar year to 390 million tonnes from 400 million tonnes.
One major worry for global coal producers has been the shift toward cleaner fuel sources in China, the world’s largest importer. The Communist nation has been rapidly establishing hydro-power generation capacities, as well as gas-fired thermal plants, as it tries to mitigate high air pollution levels.
But a greater concern for coal producers going forward could be a proposal to ban purchases of coal with a heating value below 4,540 kilocalories (kcal) a kilogram, sulphur content above one per cent and with ash content higher than 25 per cent. This could also result in increased supply.

While other producers opted to go slow on their coal projects, Australian miners were ramping up output to take advantage of the fall in the Australian dollar versus the US dollar. While the cost of shipments from Newcastle fell by 13.3 per cent in US dollar terms this year, prices have only been eroded by 5.8 per cent in Australian dollar terms.
This has helped boost Australian producers’ revenues and given them an incentive to increase supply. Australia is the world’s second-largest coal exporter.
With Chinese import demand slowing down and the US shifting to cheaper shale gas, India has a better negotiating position in global coal markets. A good monsoon this year has enabled India to increase reliance on hydro sources for power generation. What is more, the economic slowdown is likely to hurt coal import volumes.
A 4.7 per cent rise in Coal India’s production during the first half of 2013-14 will have a role to play in determining the exact quantum of imports. Coal India, prices its output lower than international benchmarks, viz, coal of 5,200 kcal/kg gross calorific value commands a rate of Rs 1,250/tonne ($20.42) in the case of power utilities, fertiliser units and the defence sector and Rs 1,690/tonne (27.60) for other industries. This is nearly three-fourth lower than international rates.
According to the latest Commerce Ministry data, India imported 7.9 mt of coking coal for its steel and cement plants and 32.8 mt of steam coal that was used for thermal power generation purposes in the first quarter of 2013-14. The imports were valued at $3.8 billion. In 2012-13, the country’s coal imports were valued at $16 billion, of which coking coal constituted 35.6 mt and steam coal 106.7 mt.
Posted by Unknown at 12:01 PM