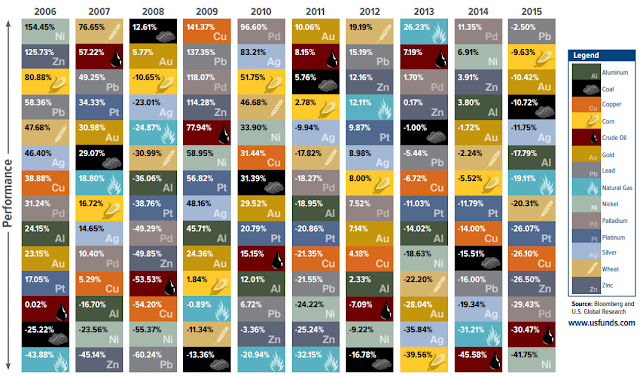 At the beginning of each year, U.S. Global Investors puts out a fantastic visualization called the Periodic Table of Commodity Returns. This year’s version has an interactive design that allows users to sort returns by various categories including returns, volatility, and other groupings.
For those keeping score, 2015 was a historically bad year for commodities in almost every regard.
Base Metals: The fact that lead was the best performing commodity with -3.5% returns throughout 2015 is not a good sign. However, compared to its fellow base metals such as copper (-26.1%), zinc (-26.5%), aluminum (-17.8%), and nickel (-41.8%), lead did wonderfully in comparison.
Precious Metals: Gold held in there as a relative top-performer with only a -10.4% dip. That said, it’s started off 2016 with a nice rally so far. Silver, platinum, and palladium did worse in 2015, all returning -11.8%, -26.1%, and -29.4% respectively.
Energy: The worst performing commodity of 2014 was the second-worst performing commodity of 2015. Oil was been routed in the last two years, with -45.6% and -30.5% returns respectively. Other fossil fuels have followed, with natural gas (-19.1%) and coal (-10.8%) both losing ground in 2015 as well.
Food: Corn was among the “best” performers, returning -9.6%. Wheat struggled more throughout 2015, returning -20.3%.
Deflating commodity prices also compounded with a strengthening dollar to hit currency markets hard, allowing Bitcoin to become the best performing currency of 2015 by far. Countries heavily reliant on commodity exports such as Canada, Brazil, Russia, Mexico, Australia, Norway, and South Africa had their currencies hammered in relation to the U.S. dollar.
Posted by Unknown at 1:00 PM