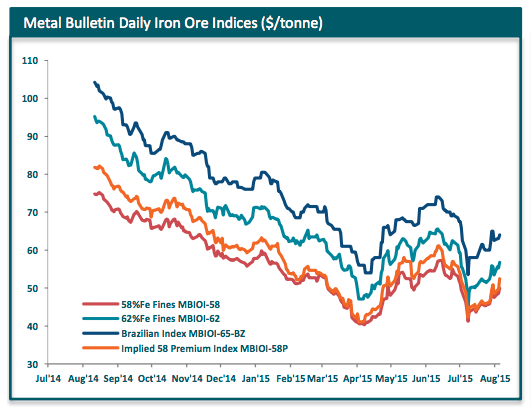 The price of iron ore jumped on Wednesday as the market for the steelmaking raw material in top consumer China picks up and traders square positions ahead of a public holiday in the Singapore hub.
The benchmark 62% Fe import price including freight and insurance at the Chinese port of Tianjin advanced $1.40 or 2.5% to $56.40 a tonne, according to data provided by The SteelIndex. That's up just under 28% from record lows hit July 8.
The advance in the Metal Bulletin's benchmark 62%-index at the ports of Qingdao-Rizhao-Lianyungang in China was $1.49 to $56.78 while lower grade 58% fines soared $2.91 a tonne to $52.46, a 5.9% gain on the day.
Chinese steel prices have come off one-month highs hit yesterday but at $337 a tonne the most-traded rebar contract on the Shanghai Futures Exchange is up sharply from a record low of $305 hit early July.
Platts News reports that some Chinese steel mills have begun to raise output on the back of the higher rebar and billet prices:
"Many mills near Beijing will be mandated to reduce their steel output so as to ensure a clear blue sky in the capital," the source said. "Mills in the south that not affected by the output cut are producing as much as possible so that they have steel products on hand to sell when steel prices are expected to hike by end of this month."
That blue sky would be courtesy of the Chinese government which has halted all construction inside the capital city and ordered steelmakers in areas surrounding to make drastic cuts in production and ahead of September 3 military parade marking the 70th anniversary of the end of World War II.
Not everyone is convinced that the rally in steel and iron has much further to go. One steel trader told Reuters that "some traders and mills are trying to sell more as buying isn't as strong as the rally in prices and they are worried that prices might have hit the ceiling at the moment."
A slowing economy and rapidly cooling property market have seen the country's steel consumption contract by 4.7% in the first six months of 2015 according to the country's Iron and Steel Association (CISA).
China forges almost as much steel as the rest of the world combined and the country sucks in more than 70% of the world's seaborne iron ore.
Posted by Unknown at 12:37 PM