Less than 24 hours ago, we argued that although it might have seemed as though Brazil hit rock bottom in Q2 when it suffered through the worst inflation-growth mix in over a decade, things were likely to get worse still.
The country, which is also coping with twin deficits and a terribly fractious political environment, is at the center of what Morgan Stanley recently called “a triple unwind of EM credit, China’s leverage, and US monetary easing” and now that its most critical trading partner has officially entered the global currency war, all roads lead to further devaluation of the faltering BRL.
And it’s not just the BRL. As Bloomberg reports, former IMF economist Stephen Jen (who called the 1997 Asian crisis while at Morgan Stanley) thinks EM currencies could fall by an average of 30% going forward on the back of the PBoC’s move to devalue the yuan. Here’smore:

[The] devaluation of the yuan risks a new round of competitive easing that may send currencies from Brazil's real to Indonesia's rupiah tumbling by an average 30 percent to 50 percent in the next nine months, according to investor and former International Monetary Fund economist Stephen Jen.

Volatility measures were already signaling rising distress in emerging markets even before China's shock move. An index of anticipated price swings climbed above a rich-world gauge at the end of July, reversing the trend seen for most of the past six months.

"If this is the beginning of a new phase in Beijing's currency policy, it would be the biggest development in the currency world this year,'' said Jen, founder of London-based hedge fund SLJ Macro Partners LLP. "The emerging-market currency weakening trend is now going global.''

Latin America is a particular concern because of the region's high levels of corporate debt, said Jen

Jen recommends selling the real, rupiah and South African rand -- all currencies of commodity exporters, which rely on China for a large chunk of their foreign earnings.

As well as the drop in raw-materials prices, the prospect of higher interest rates in the U.S. has also drawn away investment, pushing a Bloomberg index of emerging-market exchange rates down 20 percent in the past year. A Latin American measure headed for its 13th monthly loss out of 14, while an Asian gauge plunged Tuesday to its lowest in six years.

And a bit more color from WSJ:

If China’s devaluation deepens, pressure to weaken currencies could become particularly intense in other Asian nations that export large amounts to China or compete with Beijing in other markets. Asian currencies tumbled on Tuesday, notably the South Korean won, Australian dollar and Thai baht, as investors bet China’s move could lead to further monetary easing in those nations. Many Asian nations have cut rates this year and could be forced to take further action in coming months.

“A new theme has emerged—one of Asian currency weakness,” said Wai Ho Leong, an economist in Asia at Barclays.

To be sure, it's all down hill from here, and on that note, we'll reprise our conclusion from last week's "Emerging Market Mayhem" piece: Between an inevitable (if now delayed) Fed hike, stubbornly low commodities prices, the entry of the world's most important economy into the global currency wars, and, perhaps most importantly from a big picture, long-term perspective, a seismic shift in the pace of global demand and trade, we could begin to see a wholesale shift in which the markets formerly known as "emerging" quickly descend into "frontier" status and after that, well, cue the "humanitarian aid" packages.
*  *  *
Here's a look at the damage since Monday, right before the devaluation: 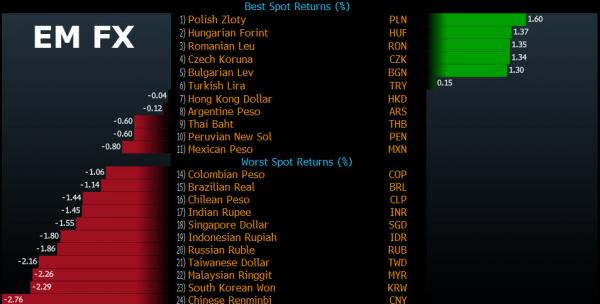