Whether or not institutional investors, large speculators, decided to invest alongside Putin in the one trade that is most critical to the future prosperity and positive cash flow balance of Russia, namely keeping the price of Crude high, and rising, is unknown, however, as the following chart the net position in crude oil futures as of the week of March 4, just hit an all time high of $44.0 billion up from $42.4 billion the week prior, surpassing all prior peaks, and certainly any set during the summer of 2008 when oil was threatening to make a run on $150, and was set to hit $200 if one believes Goldman (which nobody does).
Needless to say, any de-escalation in the Crimea - which has certainly been the key catalyst for the full court press to bet on rising crude prices in recent weeks - will have a substantial knock on effect of forcing open call positions to close, and in the process lower the price of crude further beyond just fundamentals, assuming those still exist. 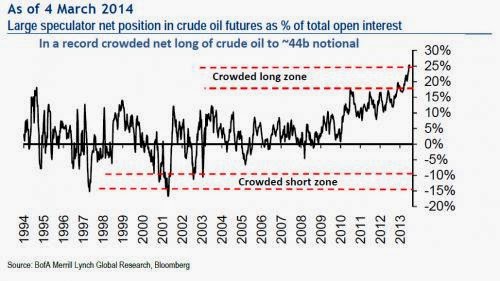