Oil Prices Up On Egypt Crisis and Drop in US Supply.

The market is being guided higher by an up-trending Gann angle from the April 2013 bottom at $86.29. speculators went after the last swing top at $99.21, putting the market in a position to challenge a top from May 2012 at $104.50.
Further rally is now expected to head back to 110.55/114.83 resistance zone. On the downside, break of 100.94 is needed to indicate short term topping. Otherwise, outlook will stay bullish. 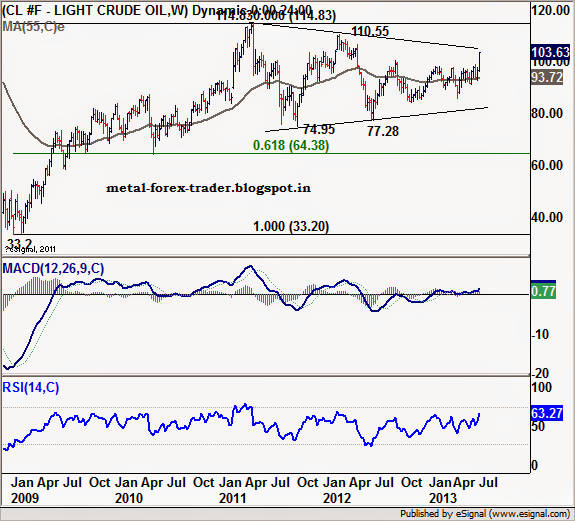 The market is being driven higher for two main reasons. Firstly, the American Petroleum Institute reported a drop in supply by 9.4 million barrels last week. The decline of nearly 10.0 million barrels was the biggest reduction in more than 10 years. The draw-down took traders by surprise, triggering the sharp upside breakout. The rapidly tightening supplies could mean the start of long uptrend.
The unrest in Egypt is the second key reason why crude oil prices are rising. Bullish speculators fear a disruption in supply because of the lack of stability in the region. These speculators are betting the political turmoil will lead to a disruption in the transportation of nearly 2.4 million barrels per day of oil.
During the past week, Egyptian President Mohamed Mursi rejected an army ultimatum to leave office. Other than the street violence, traders haven’t seen any military action yet, but based on the size of the move this week, speculators are anticipating…
Posted by Unknown at 4:34 PM