TRADERS NEED TO GET THEIR MIND RIGHT

The following is for those traders who, with a fixed mind-set, think…
…success is something over there
…trading is about being right, not about making money
…trading is too challenging
…the stock market is fixed with too many obstacles
…trading is about finding the effortless holy grail
…losses are to be avoided at all costs
…others’ success is threatening

In many years of research, We have found that some people hold a "fixed mindset" about their personal qualities (like their intelligence or talents). They believe they have a fixed amount and that's that. This belief often makes people so concerned with how much they actually have, that they will close themselves off to challenging tasks for fear that they will reveal (permanent) deficiencies.

But other people hold a "growth mindset" about these same qualities. They believe these qualities can be developed with effort and instruction. As a result, they are ready to take on challenges, they are not afraid of mistakes, and they bounce back from failures. And they often end up accomplishing more.


Mindset: The New Psychology of Success

In the book, It will show how these mindsets operate in educational settings, in business, in sports and in relationships. I also show how parents, teachers, and coaches promote the fixed and the growth mindsets. For example, my work has shown that praising students intelligence can be harmful because it creates a fixed mindset. More about this later.

It's such a simple concept, really, but revolutionary for all that. Freeing ourselves of that fixed mindset is incredibly liberating, also a bit scary. How do you teach people to radically alter a way of thinking that has been entrenched for so long? Is it a difficult and painful process? Can you give some examples of how this works?
You're so right--freeing ourselves of a fixed mindset can be incredibly liberating, but also scary. Why is it so scary? Well, maybe our "fixed" intelligence or talent made us feel special, a bit better than others, and it's hard to give that up. Or maybe we used our lack of fixed talents to explain why we haven't succeeded or as an excuse for not exerting effort. That's also hard to give up. In short, a fixed mindset offers a simple way to see the world (everyone has fixed traits) and an easy way to understand why some people succeed (they have high fixed ability) and some don't (they have low fixed ability).

But people can be taught to embrace a new way of thinking--to replace a fixed mindset with a growth mindset. First, people should be aware of the new neuroscience, which is finding that the brain is much more malleable than we ever imagined. Cognitive psychology is also identifying the core components of intelligence and showing they can be taught.

Next, people can look into their own experiences for evidence for a growth mindset. What is something that you weren't good at and are now very good at? How did this happen and what does it tell you about ability and how it can be developed? Or, think of someone you thought could never do something, but he or she did it.Finally, look at the diagram below. Every time you find yourself thinking a fixed mindset thought, transfer over to the growth mindset side of the chart and replace it with the growth mindset thought. Use the diagram to learn to think and talk to yourself from a growth mindset place. (By Carol Dweck, Lewis and Virginia Eaton Professor of Psychology at Stanford University.) 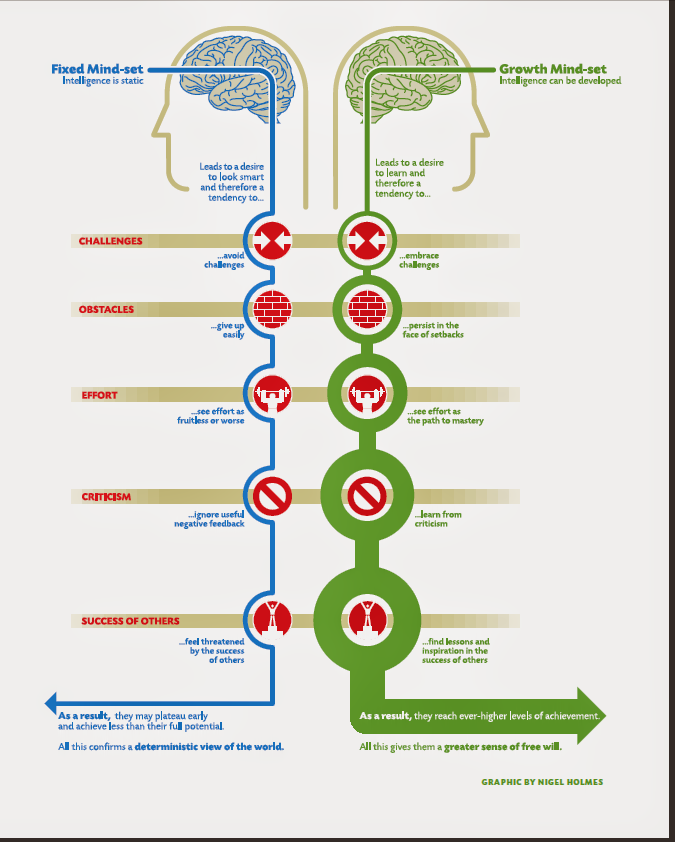