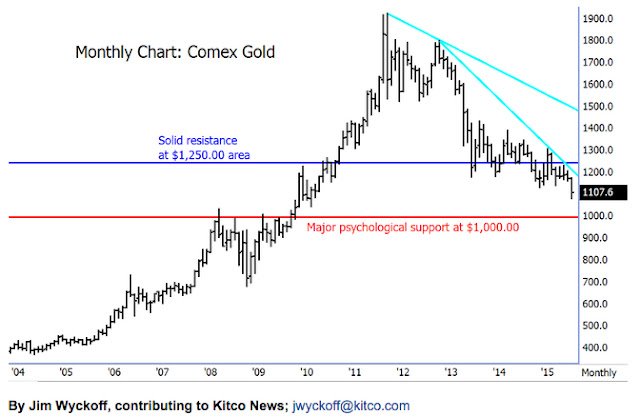 Gold prices continued its downward spiral Tuesday trading close to their lowest level in five years amid rising expectations the U.S. Federal Reserve will hike interest rates later this year.
The precious metal dipped down the $1,100 an ounce-mark in early Asia hours, but came back up above that level on bargain hunting.
Prices were just modestly lower in early U.S. trading Tuesday, changing hands at $1,105.10 an ounce at 9:15 am ET.
On Monday, prices dropped down to $1,080.00 an ounce, the lowest since March 2010, causing a stock blood bath among gold miners.

Brokers and market analysts are speculating that at least one major fund took advantage of the thin market to push the gold price through a support level on the charts, possibly because they had already sold gold short.
They said the sudden collapse bore similarities to “bear raids” by Chinese funds in copper in January, which drove red metal prices down to a six-year low.
“There is to my mind no coincidence that this happened in the quietest, thinnest period of the week,” David Govett, head of precious metals at Marex Spectron in London, told Financial Times.
“Anyone who trades gold knows not to put any volume into the market at this time, unless they deliberately want to move it in a big way,” Govett added.
Kitco’s analyst Jim Wyckoff says that a sustained drop below the $1,100 mark “would then open the door to still lower prices, with an ultimate downside objective being the 2008 low of $681.00.” And he illustrates his point with the following chart.
Monday's price dip dragged gold companies stocks down to historical lows:
Gold prices have been steadily falling since a peak of $1,900 an ounce in September 2011.
Posted by Unknown at 7:51 PM