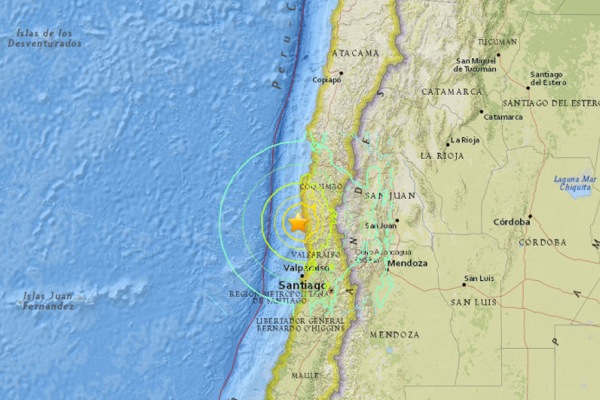 The quake is the latest natural catastrophe to roil mining in copper-rich Chile, which accounts for a third of global red metal output. (Image courtesy of USGS)
Mining operations were suspended at two major copper mines in Chile after a magnitude 8.3 earthquake struck off the coast of the country on Wednesday, killing at least five people and slamming powerful waves into coastal towns.
The closure of the mines, operated by Codelco and Antofagasta (LON:ANTO), pushed copper prices on the London Metal Exchange to two-month highs in early Asian trading as worries about supply disruptions offset lingering concerns about demand from China amid copper's longest rout in years.

Operations were cancelled for safety reasons as several aftershocks, including one at magnitude-7 and four above 6, continue to shake the region after the initial earthquake.

The companies said no damages have been registered at the mines, but operations were cancelled for safety reasons as several aftershocks, including one at magnitude-7 and four above 6, continue to shake the region after the initial earthquake.
By mid-morning Eastern Time, prices had come back down to around $5,340 as most miners with operations in Chile updated their status saying that workers were safe and mines were undamaged.
Codelco suspended open-pit operations at its Andina mine and evacuated workers at its smaller Las Ventanas refining and smelting division, as well as at the two northern ports of Mejillones and Barquito, as a precautionary measure. By Thursday morning, the state-owned company said (in Spanish) that Ventanas was operating as usual, while Andina remains halted until inspections have conclude, which is expected to happen later today.
London-listed Antofagasta said its flagship Los Pelambres mine, which produced over 400,000 tonnes of copper last year, will remain closed until further notice, though there were no reports of damage to personnel or equipment.
Chile, the world's top copper producer, is one of the most earthquake-prone nations in the world. It was hit by an 8.8-magnitude quake in 2010 and in 1960 recorded the largest ever on Earth, according to the U.S. Geological Survey.
Earlier this year unusual heavy rains caused flooding and forced producers to shut many minesin Chile's copper-rich north.
Posted by Unknown at 11:40 AM