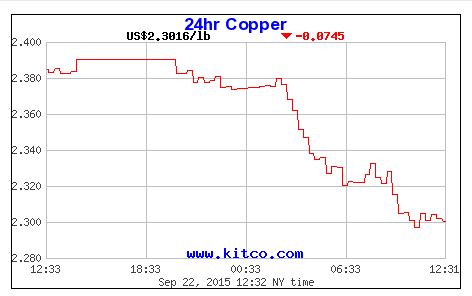 Copper led losses in industrial metals, falling by 2% while zinc dropped to a five-year low, on uncertain demand from China. The plunge also sent the shares in some of the world’s largest mining companies tumbling while hurting copper-dependent economies from Chile to Zambia.
Freeport-McMoRan (NYSE:FCX), the world's largest publicly traded copper producer, fell as much as 4% at $10.11. Rival BHP Billiton (NYSE:BHP) was trading 4.3% to $32.68 at noon, while Southern Copper (NYSE:SCCO) was down around 2.3%.
In Canada, First Quantum Minerals (TSE:FM) and Teck Resources (TSE:TCK.B) sank at least 9% as copper for delivery in three months dropped to a two-week low. While Lundin Mining (TSE:LUN) followed closely, losing almost 7% of its stock value at noon ET.
Copper and other metals have suffered from a slowing Chinese economy and a shift in growth towards sectors that require less commodity imports.
So far, copper prices have failed to react significantly to news of supply disruptions in Zambia and Chile, remaining more responsive to news from China, the world’s largest consumer, accounting for about 45% of world demand last year.
Posted by Unknown at 10:20 AM