The Best And Worst Performing Assets Of 2015

Late in 2015, Germany's Handelsblatt reported, erroneously, that Venezuela was the best performing asset class of 2015.

It wasn't. The reason this was in error is because if one adjusts the returns into the real currency exchange rate, one which reflects the true implosion of the economy, instead of the government "mandated" one, the result is very different, one which shows that contrary to popular wisdom, during hyperinflation stocks are not a good store of value.

So what were the real best and worst performing assets of 2015? Here, with the full breakdown in both local currency and USD-redenominated terms, is DB's Jim Reid.
* * *
With markets wrapped up for 2015 now, reviewing the performance of asset classes last year shows that it was one where negative asset class returns were aplenty, while those finishing in positive territory were few and far between.
Indeed, of the 42 assets we monitor in Figure 5, just 9 finished with a positive return in Dollar-adjusted terms over the full year. Of these, the big winner was the Nikkei (+10.4%) - boosted by the accommodative BoJ and relatively stable Yen. In the periphery we saw both Portuguese (+6.5%) and Italian (+3.9%) equity markets also close higher, while in China the Shanghai Comp (+6.2%) finished up for the year but not without some huge volatility over the 12-months and of course ending well off the highs it posted back in June.
The S&P 500 (+1.4%) also closed just about in positive territory for the year on a total return basis although that performance was the worst for the index since 2008 as energy stocks clearly weighed for much of the year, while there was a similar return for US Treasuries (+0.8%).
At the other end of the scale there were some notable losers for us to pick out. In particular it was Oil which stole the limelight with huge falls for both Brent (-44.1%) and WTI (-30.5%) while Copper (-24.4%), Wheat (-20.3%), Silver (-11.7%) and Gold (-10.4%) were also hard hit. Both political and economic fragility saw Brazil (-42.0%) and Greece (-30.3%) fall the most in the equity space while EM equity markets finished with a broad -14.8% decline.
US Dollar strength was a big theme for 2015 as evidenced by the lack of winners above with the Dollar index returning a hefty +9.3% for the full year. This meant there were decent falls for the Euro (-10.3%), Aussie Dollar (-10.7%) and Canadian Dollar (-16.1%).
In local currency terms Russian equities (+32.3%) came out on top along with some of the peripheral markets. In the credit space it was the divergence between European and US credit which was most notable. Reflecting the higher exposure to energy credits, US HY closed with a -5.0% loss for the full year, while US IG was down a more modest -0.4%. In Europe we saw EUR HY finish +0.5% and EUR Sub Fins +1.4%, although EUR IG Corp was down -0.7%. Again converting this into US Dollar terms results in any gains for European credit being wiped out and in turn underperforming US credit for the full year. 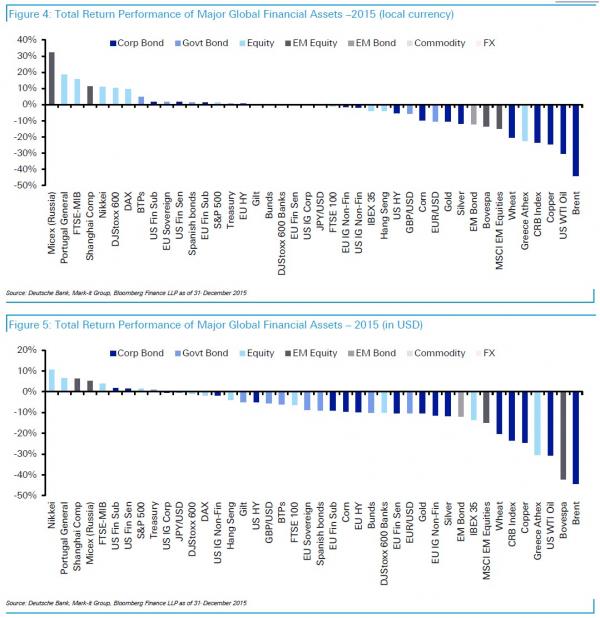