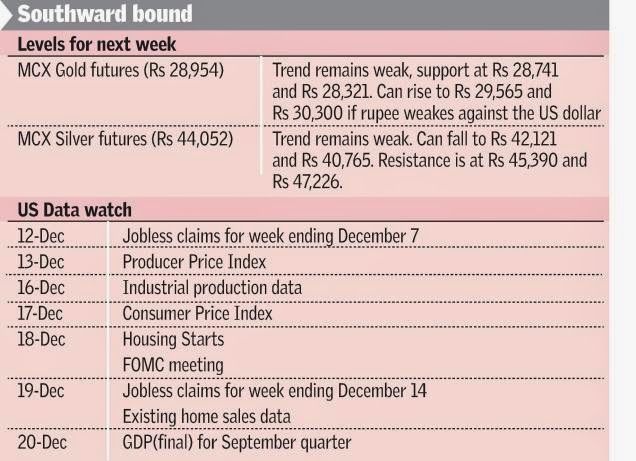 The domestic market investors have to wake up to the reality of the tapering at least now. Gold prices in India have remained artificially high as rupee lost strength against the dollar.
Gold prices are taking a hit, thanks to increasing expectation of an imminent tapering. At $1,229.10, the metal was down 2 per cent last week. Silver too dropped and closed at $19.50/ounce.
The surprise from a higher than estimated growth in the US GDP (3.6 per cent versus 2.8 per cent) in the September quarter and the upbeat jobs data hit precious metals. The unemployment rate in fact hit a five-year low at 7 per cent in November.
1st annual drop in 13 yearsGold now stands 27 per cent lower for the year, the first annual drop in the last 13 years.
Investors are rushing to offload their gold investments. SPDR Gold Trust, the world’s largest gold backed exchange traded fund reported its holdings at 835.7 tonnes on Friday, down by 7.5 tonnes for the week. Till date in 2013 investors of this fund have sold 515 tonnes of gold, bringing down the fund’s holding 38 per cent.
In the domestic market too, gold drifted sharply lower. The MCX gold futures contract closed the week at Rs 28,954/10 gram, down 4 per cent. MCX silver ended at Rs 44,052/100 gram, down 0.5 per cent. The loss in these contracts followed gains in the rupee. The currency crawled from 62.8 against the dollar to 61.4 in the last two weeks.
The next two weeks are packed with data releases. From the jobless claims data on Thursday — December 12 — to the crucial Federal Open Market Committee meeting during December 17-18 and the September quarter final GDP numbers on December 20, traders will have to keep a watch on the whole lot of them. It is expected that the US Fed may announce moves to start tapering of its stimulus programme in the coming meet.
The end of the easy money policy in the US would bring more pain to gold as investors move over to bonds and equity. Do not initiate fresh long positions in gold. Existing investors can book profits in the counter and trade with strict stop-loss.
Domestic investors have to wake up to the reality of the tapering at least now. Gold prices in India have remained artificially high as the rupee lost strength against the dollar. But, this may not continue. The sharp decline in CAD and dropping gold imports are positive for the rupee and risks of the rupee inching higher can’t be ruled out.
In the run up to the elections, the expectations of a new reform-centric government at the Centre can help the rupee. From August end, the Indian currency is already up 10 per cent against the greenback.
Levels for tradersGold is moving towards its June low of $1,180.57/ounce. Once the $1,200-mark is cut, the fall will be swift. Break of June lows can take the metal down to $1,155. On upside, the first resistance is at $1,296.
MCX gold has remained very volatile in the last two weeks giving opportunity for both long and short trades. It first rose to hit the resistance at around Rs 30,900/10 gram levels as indicated and later drifted to close the week near its support at Rs 29,400.
In the next fortnight, the contract may get even more volatile. If rupee remains flat or inches up, MCX gold futures contract (Rs 28,954/10 gram) could slide to Rs 28,741 and Rs 28,321 tracking international prices. If these levels are cut, it can also test Rs 27,248. However, if rupee is weak, it will arrest the fall in the price of the contract and the contract may even strengthen to Rs 29,565 and Rs 30,300.
MCX silver (Rs 44,052/100 gram) continues on a bearish trend and may fall further to Rs 42,121 and Rs 40,765 in the coming weeks. On the upside, resistance is at Rs 45,390 and Rs 47,226.
Posted by Unknown at 5:01 PM