After scandal, copper price could follow iron ore over cliff

The copper price dropped 3.5% last week after a weaker than expected gauge on manufacturing activity in China together with a probe into the use of metals in trade finance deals rattled the market.
July copper futures in New York ended the week at $3.0585 a pound ($6,700 a tonne), down from $3.37 at the outset of 2014.
Chinese authorities have begun an investigation into allegations that several companies pledged the same copper and other industrial metals held at the port of Qingdao as collateral for loans to different banks.
Beijing is stepping up efforts to curb the country's vast shadow banking system and the revelations could see a further clampdown on this lending practice which have been a key part of the commodities trade – particularly in iron ore and copper – for years.
As these deals are being unwound it could lead the dumping of copper onto the market that would otherwise have been tied up in financing deals leading to sharply lower prices.

Down 20% over the past month, the process of unwinding is already playing itself out on the iron ore market

The process is already playing itself out in iron ore which has slumped 20% over the past month. Iron ore was hit first because apart from the credit clampdown China is also targeting the steel industry's chronic overcapacity and environmental impact as part of its "war on pollution".
While iron ore at the China's ports continues to be stockpiled at record levels, official copper inventories have been sharply reduced over the past couple of months.
However, while deliverable stocks held by the Shanghai Futures exchange has dropped to 92,000 tonnes it is estimated that China's unofficial copper stocks used in financing could be as high as 700,000 tonnes according to a new report by Capital Economics meaning the tightness in the market has been artificial.
While iron ore imports slowed to 77.4 million tonnes in May, down 7.2% and copper imports fell 15.6% from a month ago to 380,000 tonnes, year on year imports are still expanding at a rapid rate.
Should the stockpiles of iron ore of more than 110 million tonnes and the "off-market" copper warehouse inventories be released, both commodities have further to fall.

China's unofficial copper stocks used in financing could be as high as 700,000 tonnes

Iron ore has recovered somewhat after falling to a 21-month low of $92 a tonne end of May and copper is still trading well above near four-year lows of $2.92 hit in March.
Copper plummeted 8% over just three trading days during the March slump which was prompted by China's first ever corporate bond default and markets could now be entering a particularly rough patch as banks start to call in dubious loans.
Capital Economics sees the correction this way:
"If the historic relationship between copper and iron ore prices is to be restored, it is likely to take the form of a renewed fall in copper prices."
The research house predicts "another leg down in the copper price" to $5,800 per tonne ($2.63 per pound) by the end of the third quarter, while the iron ore price is forecast to end the year at $90 per tonne. 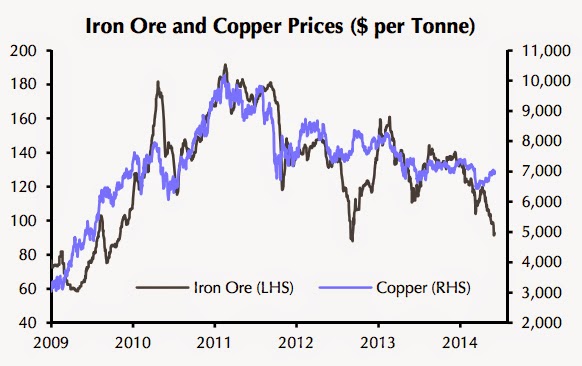