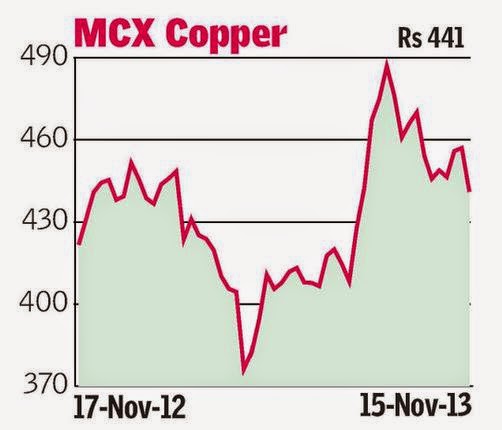 The MCX gold futures contract is relatively more bullish in the short-term when compared with other commodities. Copper looks vulnerable while silver, crude oil and natural gas are testing their significant 200-day moving average supports.
Gold (Rs 30,332)
The MCX gold futures contract is bullish in the short-term. There is an inverted head and shoulder pattern on the daily chart with the right shoulder being formed now. Support is at Rs 29,700 and the contract can rise to Rs 31,500 in the short-term. A strong weekly close above Rs 31,500 will confirm the pattern and turn the medium-term outlook also bullish for the targets of Rs 33,200 and Rs 34,000. On the other hand, if the contract falls below the immediate support Rs 29,700, then the price can decline to test the 200-day moving average support near Rs 28,500. But the probability of the price declining below Rs 29,700 immediately is very low.
Silver (Rs 46,741)
The MCX silver contract remains weak. Although the 200-day moving average support is close, at Rs 46,701, failure in the last two weeks to breach the resistance at Rs 49,000 denotes weakness. Prices can decline to Rs 45,500 in near future. Breach of Rs 45,500 can take the contract further lower to Rs 44,500. On the other hand, a bounce from Rs 46,701 can result in the metal testing the Rs 49,000 resistance once again.
The medium-term outlook is also bearish. The price can decline to Rs 41,500 over this time period. Key resistance is at Rs 53,000.
Copper (Rs 441)
The MCX copper contract continued consolidating between Rs 440 and Rs 460 for the sixth consecutive week. Within this range, the contract has dropped sharply last week to close near the lower end of this range. The bias is bearish. It can decline below Rs 440 and fall to Rs 425. Failure to breach Rs 440 can keep the contract in this range for some more time.
The medium-term outlook is bearish. Strong resistance is at Rs 470 and the price can decline to Rs 400-390. Only a strong rise above Rs 470 will turn the outlook positive.
Crude oil (Rs 5,903)
Last week, the MCX crude oil contract failed to extend its corrective rally beyond its resistance at Rs 6,100. The contract looks vulnerable to decline below its Rs 5,850 support targeting Rs 5,650 in the short-term. However, if the support at Rs 5,850 holds, then there is a possibility of a rally once again to Rs 6,100 or even Rs 6,230.
The medium-term outlook remains bearish as long as the contract trades below the Rs 6,600. A decline to Rs 5,400 is possible over this time period.
Natural gas (Rs 229)
The 200-day moving average support near Rs 223 has held very well last week. The MCX natural gas contract has bounced back from this support to close higher by a per cent for the week. For the short-term, the contract can continue to consolidate sideways between Rs 210 and Rs 240. Within this range, the contract can rise to Rs 235-240 in the coming week.
However, the medium-term outlook is bullish. The contract has been moving in a bull channel for more than a year. The channel support is near Rs 200 and a decline to this support will provide a good buying opportunity. The contract can target Rs 270 over this time period.
Posted by Unknown at 8:55 AM