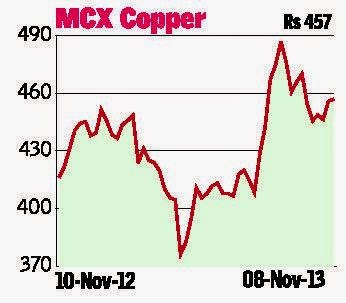 MCX copper futures contract has retained its Rs 440-460 sideways move for the fifth consecutive week. A breakout on either side of this range will decide the next leg of move. However, last week’s price movement lends high probability for the contract to break above Rs 460 and move to Rs 470. Failure to do so can keep the contract range-bound between Rs 440 and Rs 460 for some more time.
However, the medium-term outlook is bearish. Key resistance is at Rs 470 which needs to be broken to turn the outlook positive. The contract can fall to Rs 410 and Rs 390 in the medium-term.

The weakening of the rupee beyond 62 against the dollar saw the MCX crude oil contract ending its nine-week losing streak. Technically, the price has risen back above the significant 200-day moving average support. There is high probability for a corrective rally now. As such fresh short positions can be avoided at the moment. Immediate resistance is at Rs 6,100. A break above this level can take the price higher to Rs 6,300-6,400 initially and even to Rs 6,600 in the short-term. Support lies in the Rs 5,900-5,880 region.
The medium-term outlook will remain bearish unless the contract breaks above Rs 6,600. The price can decline to Rs 5,500-5,400 in the medium-term.

The MCX natural gas contract has taken support from near Rs 210 and has risen by 2.7 per cent last week. Immediate support lies in the region between Rs 220 and Rs 215. The contract can rise further to Rs 235-240 in the coming week. Significant resistance is at Rs 240 and a breach of this level will turn the outlook bullish. Failure to rise above Rs 240 could keep the contract in a sideways range between Rs 210 and Rs 240 in the short-term.
However, the medium-term outlook is bullish, and the contract can target Rs 270. Strong support is near Rs 200.

The MCX zinc contract has risen by 5.6 per cent in the last few weeks after finding support near Rs 115. A rounding bottom pattern is visible on the daily candle chart. The immediate short-term outlook is positive with significant support in Rs 117-115 region. Resistance is at Rs 121 and a break above this level can take the price higher to Rs 125.2, which is a key resistance level.
A breakout on either side Rs 115-125 will decide the medium-term trend thereafter. However, failure to breach Rs 125.2 will have high probability to take the contract lower to Rs 104.

MCX nickel contract has failed to breach above Rs 900 decisively. The contract has closed lower by 2.8 per cent for the week. Technically, the 100-week moving average, currently near Rs 914, is restricting the upside. The short-term outlook will remain bearish, as long as the contract is below the Rs 900-915 resistance zone.
The price can decline to Rs 850-840 in the short-term. An eventual break below Rs 840 can take the contract lower to Rs 800.
For the medium-term, strong support is in the Rs 780-750 region. A fresh leg of up move from this support zone is possible. Target for the medium-term is in the range of Rs 950-1000 .