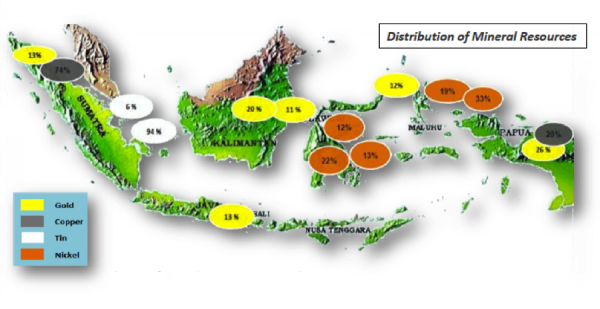 Indonesia's chief economics minister is spearheading a series of high-level government and industry meetings on Wednesday, aiming to broker a deal with foreign miners to restart copper concentrate exports that were halted nearly five months ago over a controversial tax.
Billionaire businessman Chairul Tanjung, who was appointed to the role last month, has made restarting copper exports a top priority amid a widening trade deficit, a slowdown in first-quarter economic growth and the prospect of job layoffs at mines.
Tanjung was due to attend a cabinet meeting on Wednesday morning to thrash out a new tax deal that could potentially be put before miners, including Freeport-McMoran Copper & Gold Inc and Newmont Mining Corp.
"After the cabinet meeting I will receive a report from the negotiating team at the coordinating economic ministry," Tanjung said on Wednesday, speaking ahead of the cabinet meeting in the capital Jakarta.
"Let's see the result. If the results are finalized, I will officially receive the Freeport and Vale CEOs," he said.
Indonesia on Jan. 12 introduced a ban on ore exports and levied an escalating tax on concentrate exports as part of efforts to force miners to build smelters and processing plants in Southeast Asia's largest economy.
The new tax halted about $500 million worth of monthly mineral ore and concentrate exports and led Freeport and Newmont Mining, who account for 97 percent of the country's copper output, to slash output as both say the rules conflict with their contracts.
Freeport chief executive Richard Adkerson was due in Jakarta this week for talks. Adkerson had been scheduled to meet Tanjung on Tuesday, but the meeting did not take place, Freeport spokeswoman Daisy Primayanti said, without giving details.
The two miners argue they should be exempt from the new export tax, which kicks in at 25 percent and rises to 60 percent in the second half of 2016, before a total concentrate export ban in 2017. They say their current contracts prohibit any extra taxes.
With the mining export stoppage about to enter its sixth month and the country's current account deficit still at a dangerous level, the credibility of Indonesian President Susilo Bambang Yudhoyono's outgoing government is also at stake. A fresh administration is widely expected to take government after July elections.
Details on what changes may be made to the export tax are not known, but late on Tuesday Tanjung reiterated that the government would look to draft a new regulation with separate incentives for miners making progress in the construction of smelters.
Both companies have questioned the economic viability of building new copper smelters in Indonesia, but have agreed to study the possibility of building a copper smelter with state-owned miner Aneka Tambang.
In addition to a breakthrough on the export tax, Tanjung, who is ranked as Indonesia's fifth richest man by Forbes with a net wealth of $4 billion, is looking to resolve long-running contract renegotiations for both Freeport and Newmont, whose current contracts are due to expire in the next few years.


Nickel producer PT Vale Indonesia is also up for a contract renegotiation.
Posted by Unknown at 11:40 AM