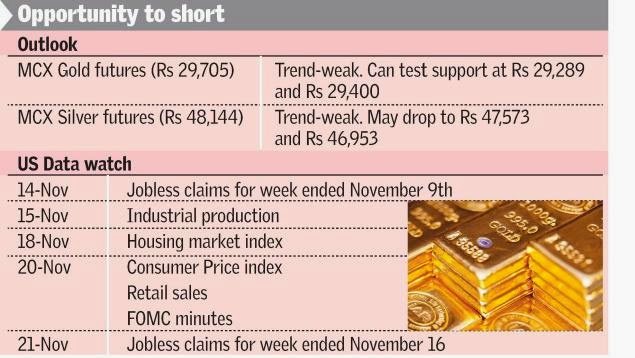 Gold was lacklustre and continued to drop in international markets. The US GDP numbers announced last week were stronger than expected — the economy grew at a rate of 2.8 per cent in the September quarter, much beyond the expected 2.3 per cent. Also, Friday’s employment numbers showed that 2.04 lakh jobs were added in October. Market expected the US government shutdown to have impacted job market figures, but, numbers actually surprised the street.
Taper fears
The fear that that the strong economic data could make the Federal Reserve begin tapering the stimulus programme, sooner than expected, hit gold prices.
The yellow metal moved under $1,300/ounce during the week and closed at $1,288.50/ounce, down 2 per cent. Silver ended at $21.5/ounce, down 1.4 per cent.
Weakness in the metal follows spike in dollar. Last week, the European Central Bank cut the benchmark interest rate to a record low of 0.25 per cent. The euro declining to $1.336 from $1,356 supported the dollar.
Holdings of the SPDR Gold Trust were reported at 868.42 tonnes on Friday, up two tonnes for the week. But, note that since May, the holdings of the world’s largest gold-backed ETF dropped by 183 tonnes.
In the domestic market, gold futures contract in MCX closed at Rs 29,705/10 gm, down 0.4 per cent. The slide in rupee contained the metal’s downfall. Rupee dropped from 61.7 against the dollar to 62.47 by end of the week. Volumes in gold futures contract averaged at 65,000 contracts during the week.
The previous two weeks saw over one lakh contracts being traded everyday.
Investment demand was also not good with volumes in gold ETF counters muted.
The demand for gold ETF units was sluggish even on Dhanteras with gold BeES — the largest gold ETF in the country seeing a turnover of Rs 21.4 crore. Last year on Dhanteras, the counter saw turnover of Rs 427 crore.
Eye on data
Stronger than expected job numbers in the US is pressuring gold downward. Traders may have to tread cautiously next week. Watch for the jobless claims figure on Thursday and the industrial production numbers on Friday. The week beginning November 18 will be more crucial with the existing homes sales data and retail sales numbers scheduled on Wednesday. The minutes of the last FOMC meeting will also be released that day. Gold price may receive support if physical buying emerges.
If the schedule for QE tapering is announced in December, borrowing rates will go up and it will be negative for gold.
In the domestic market, gold traders may have to keep an eye on rupee. If rupee weakens further against the dollar, you may see some gains in the contract. Last week rupee slid to a low of 62.75 against the dollar and bond yields surged sharply. The fear of the scaleback in US stimulus programme, is weighing on all Asian currencies including the rupee.
Go short
Gold is in a medium-term downtrend, with the $1,300 an ounce-mark cut last week. The metal could slide further in the coming weeks. A close above $1,370/ounce is needed to mitigate the negative short-term view. In the coming weeks, however, gold could decline to $1,283. If this level breaks, it could test $1,250.
Next week, you may get opportunities to short MCX gold futures (Rs 29,705/10 gm). We see the contract correcting to Rs 29,289 and Rs 29,400. If these levels are broken, then Rs 28,400 can be seen quickly. Initiate buys only if the contract cuts Rs 30,900.
MCX silver futures (Rs 48,144/100 gm) is also weak. The contract may drop to Rs 47,573 next week. After this the next support would be at Rs 46, 953. The trend would remain bearish unless the contract makes a move above Rs 50,000.
Posted by Unknown at 7:40 AM