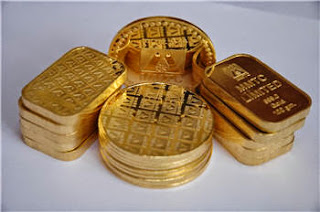 Metals and Minerals Trading Corporation of India (MMTC Ltd)- the largest player in the country’s bullion trade expects the gold imports by the country during this fiscal year to drop significantly over the previous year. The total gold imports by the country may come down to under 500 tonnes, mainly due to the stringent import restrictions.
Gold imports into the country plunged drastically during recent months. India’s gold imports during the initial six months (April ’13 to Sep ’13) of the current fiscal year totaled 400 tonnes. The September gold imports were as low as 11.14 tonnes. The rise in imports during the festive season lifted the October imports to 23.5 tonnes.
MMTC had earlier announced that it would cut volume of gold imported for domestic consumption by 30%. According to MMTC, even if monthly gold imports remain at 20 tonnes for the rest of the fiscal, the total imports would remain under 500 tonnes. If the muted festive demand witnessed during the Dhanteras and Diwali are any indication, the gold imports are likely to fall further.
The largest public sector trading body in the country also believes that there is no need of any further tightening of gold import rules by the country. The existing curbs are sufficient to bring down the total gold imports in 2013-’14 by 41% as against 850 tonnes import during last year.
Posted by Unknown at 2:14 PM