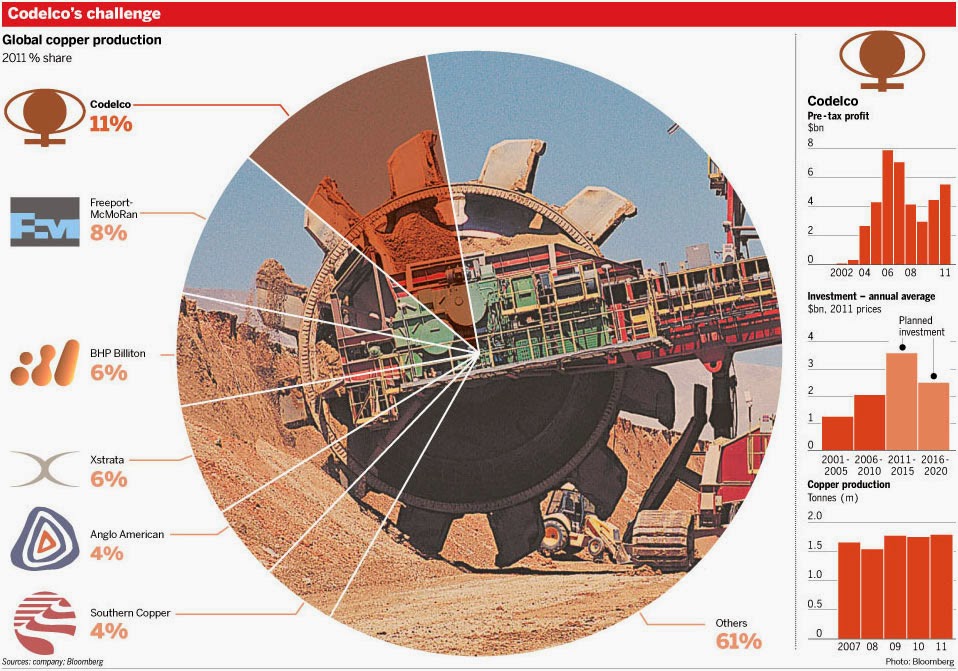 Workers at Chile’s copper producer Codelco, the world’s largest copper miner, have rejected the company's wage proposal presented during early collective contract negotiations, deferring union labour talks to October.
About 4,300 miners (or 51.2%) of El Teniente division turned down the contract offer, which in addition to base salary, included a bonus and soft loans (those offered at very low or zero interest rates) worth around $30,700. The union is asking for better long-term benefits and equal access for all workers to the company’s benefits regardless of when they joined.
Rough patch
El Teniente was the company's most productive deposit between January and September last year, mining 327,000 tonnes of red metal in the period. But Codelco is currently  facing tough times due to sinking copper prices, lack of cash and escalating costs.
The copper giant gives all its profits to the state and had been severely disappointed by the original amount of money it was returned.
As a result, Codelco decided last year to seek outside financing to implement its $27 billion investment plan for 2012-2016, and placed a $750 million bond in August.
Chile expects mining investment to reach $112 billion by 2021, figure that includes $27bn in projects planned by Codelco. By the same year, the country’s total copper production is projected to reach an annual 8.1 million metric tons.
As a back-up plan, the Chilean copper giant is exploring a more aggressive incursion in the silver market. Last November, CEO Thomas Keller said Codelco aims to become one of the world’s ten largest producer of the precious metal as soon as its touted Ministro Hales mine begins production later this year.
The nearly $3 billion copper-silver mine is expected to add 300 tons of the precious grey material to the existing silver output from the rest of Codelco’s operations in the country.
The firm owns about 11% of the world's copper reserves. The red metal accounts for 60% of the Chile's exports and 15% of its gross domestic product (GDP).
Posted by Unknown at 12:36 PM