At a time when many of the world's major stock indices are showing signs of topping, the Shanghai Composite Index is poised to continue the decline it began in 2009. Although there is probably a long-term buying opportunity on the horizon, in the near term we expect opportunities for two or more short trades. In this article, we describe our primary scenario for that index, showing possible price targets and a rough time frame for a decline. Readers interested in the alternate scenario, which is more bearish.
The spectacular crash in the Shanghai index in 2007 and 2008 coincided with the decline in stock indices worldwide, and Shanghai also participated in the global stock rally from late 2008. However, while many other indices continued to advance after that time, Shanghai has taken a sideways-down path to visit prices not far from its 2008 low.
We don't believe the decline is over. Traders working on a time frame of a few weeks may still find short trades from a continued series of lower highs, especially using the channel trendlines as a guide. Investors with a long-term perspective should watch for a buying opportunity sometime in late 2014 or 2015.
We admit it was difficult to assign an Elliott wave count to the decline from 2009. There have been several overlapping moves, and many of the sub-moves have corrective patterns. The whole decline is best seen as a large, downward diagonal C-wave. The factor that crystallized the count for us was the index's good behavior within the modified Schiff channel shown on the weekly chart below. 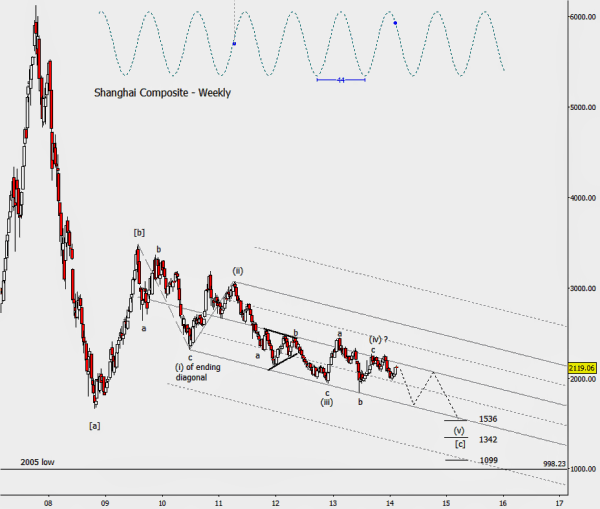 From the current price area, we expect the index to trace out a final three-wave move downward into support. If it stays within the channel, then 1,536 is an attractive target. However, 1,342 and 1,099 are also viable. In any case, if this scenario comes to pass, price probably will remain above the index's 2005 low of 998.23.
Another thing to watch for confirmation of this scenario is the index's behavior in the near-term with respect to the midline of the channel. Price should be entering the down-phase of the 44-week empirical cycle. The primary scenario would be called into question if price rises very far above the midline, and certainly if it exceeds the prior high labeled as "a" of "(iv)". At that point, the alternate scenario would probably move to the fore, and we might also consider that a cycle inversion had occurred.
Posted by Unknown at 2:51 PM