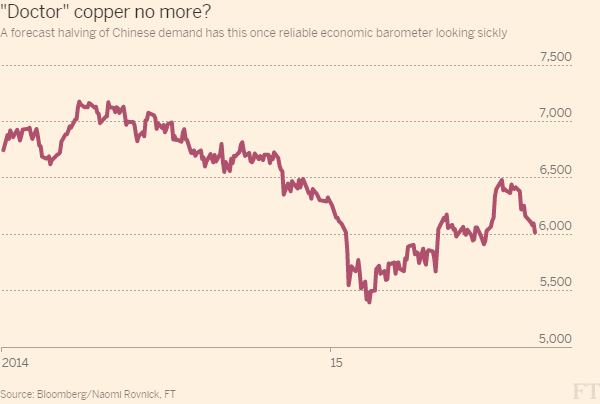 (Reuters) -Copper prices slid back below the $6,000 a tonne mark on Tuesday, after a string of global manufacturing reports revealed only modest demand growth for metals with just one month left of the normally strongest quarter for seasonal demand.
FUNDAMENTALS
* Three-month copper on the London Metal Exchange slipped by 0.4 percent to $5,999 a tonne by 1241 GMT, after closing little changed in the previous session when it plumbed its lowest since April 24 at $5,985 a tonne.
* The most-traded August copper contract on the Shanghai Futures Exchange slipped 0.6 percent to 43570 yuan ($7,029) a tonne.
* Manufacturing activity showed few signs of picking up across Europe, Asia or the Americas in May as demand stayed stubbornly weak, highlighting the need for central banks to continue supporting economic growth.
* The leaders of Germany, France and Greece's international creditor institutions agreed late on Monday to work with "real intensity" in the coming days as they try to clinch a deal in debt negotiations with Athens.
* U.S. consumer spending growth unexpectedly stalled in April as households cut back on purchases of automobiles and continued to boost savings, suggesting the economy was struggling to gain momentum early in the second quarter.
* Mining conflicts in Peru, a top global minerals exporter, will likely heat up ahead of presidential and congressional elections next year as political outsiders whip up anti-mining sentiment, government officials and business leaders said.
($1 = 6.1985 Chinese yuan renminbi)
Posted by Unknown at 9:31 AM