WTI Crude hit new 7-week lows, dropping below $57 (front-month) for the first time since April 15th's 'inventory draw' rip. In addition to reports from Reuters of leaked details about OPEC not expectated to cut production (did anyone really expect that), a combination of renewed inventory builds (as reported by API last night) and reports that Iraq is increasing its supply to new record highs is forcing futures prices to catch down to physical markets. 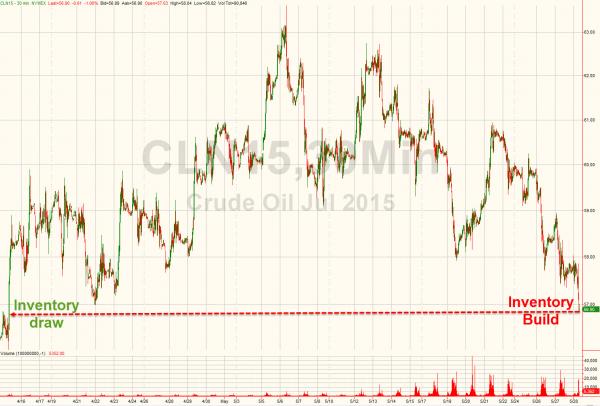 Iraq is ready to increase its crude exports to a record 3.75 million barrels per day in June, continuing OPEC’s strategy of ousting US shale producers from the market.

The extra oil from Iraq comes to about 800,000 barrels per day, more than from another OPEC member, Qatar, said Bloomberg, referring to Iraq's oil shipments schedule.

Iraq is increasing oil exports in two directions. The first is in the Shiite south, where companies such as BP and Royal Dutch Shell work. The second is Nothern Iraqi Kurdistan, whose government last year received Baghdad's consent to independent oil deliveries.

In April, Iraq exported almost 3.1 million barrels of oil per day, which is a record.

And Iran remains a worry... 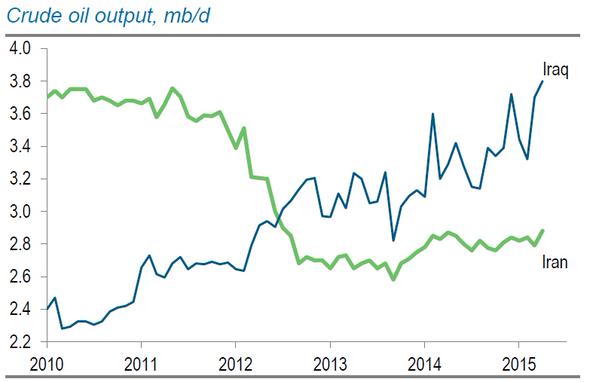 And leaked details of OPEC's report suggests no cut in production... (via Reuters)

OPEC is not expected to cut oil production at its meeting in June, and the meeting is expected to be a short one, Saudi Arabia's Al Hayat newspaper quoted an unnamed OPEC source as saying on Thursday.

Saudi Arabia will continue producing oil to meet customer demand, and its output is now at about 10.3 million barrels per day in light of growth in demand from China and India, the source added.

*  *  *
It appears, as we noted here, that futures prices are catching down to the phsyical markets' reality.
Source : www.zerohedge.com
Posted by Unknown at 5:59 AM