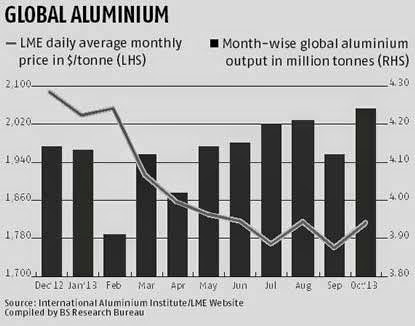 * Q1 premiums in line with offers from some producers
* Premiums up from $245-247 in Q4, match 2012 record high
* Higher premiums reflect firm demand, high overseas premiums (Adds quotes, details of negotiations)
By Yuka Obayashi
TOKYO, Dec 19 (Reuters) - Japan's aluminium premiums for January-March shipments were mostly set at $255 per tonne, up at least 3 percent from the prior quarter and matching a 2012 record high, on strong demand and high overseas rates, four sources close to the deals said.
Japan is Asia's No.1 importer of aluminium and the premiums for primary metal shipments it agrees to pay each quarter over London Metal Exchange (LME) cash prices set the benchmark for the region.
"Producers were bolder this time as China has stepped up purchases of the metal lately for arbitrage, with some paying hefty premiums above $260," a buyer at trading house said.
"To secure stable supply, Japanese buyers felt they need to accept the higher premiums," he said.
A source at one of the end-users said most deals were done at $255 this week. Another source at a producer agreed, saying most deals were booked at $255 while some were done at $256.
The first quarter premium is up about 3-4 percent from the fourth quarter's $245-247 per tonne and matches the record high of $254 to $255 hit in the fourth quarter of 2012.
Recovering demand in Japan on increased automobile output and a rush to build homes ahead of a sales tax hike next April, as well as concerns about supply were also among reasons for the higher premium, traders said.
The latest quarterly pricing negotiations began late last month between Japanese buyers and global miners including Rio Tinto Ltd , Alcoa Inc, BHP Billiton and United Company Rusal .
The premiums agreed are mostly in line with offers from some big aluminium firms of $255 to $256 per tonne, but significantly below the offer from the world's top producer Rusal.
Rusal had asked for $270, citing tight supply and healthy demand in Asia, but then decided to lower the offer for competitive reasons, a company sales official said.
Some buyers are still continuing talks, with an aim to come to an agreement this week, three other sources said.
The high Japan aluminium premiums come after a recovery in spot premiums in Europe and the United States as the metal continues to be used as collateral for financing deals, making it unavailable to the market.
The LME, the world's biggest industrial metals marketplace, announced a tougher warehouse policy on Nov. 7 to cut queues for delivery to a maximum of 50 days from over a year in some cases, after persistent complaints from metal buyers about the high premiums they had to pay.
But it may take several years for the queues to disappear, lending support to premiums.
Duty-paid aluminium premiums in Rotterdam, which have risen steadily since late October, traded at a high of $250-275 a tonne in December from around $235-255 in September.
The U.S. premiums paid on top of the LME benchmark for physical delivery AL-PREM are also heading to historic highs around 11.25 cents per lb or $248 per tonne, after falling to 9 cents a few months ago on uncertainty about the impact of the LME's overhaul of its warehousing policy, according to traders.
"Many producers are apparently suffering because the metal price at LME has been hovering at around $1,800 per tonne. They are charging a higher premium to offset cheaper metal price," a trader said. LME aluminium prices have lost almost 14 percent so far this year.


"It looks like the premiums will be staying at high levels next year unless the metal prices recover in a big way."
Posted by Unknown at 8:26 AM