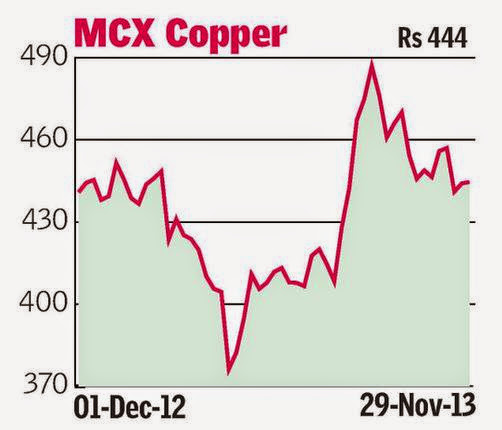 Gold (Rs 30,236)
The MCX gold futures contract has been stuck in a narrow range between Rs 29,600 and Rs 30,500 all through November. Traders have to wait for a breakout of this range to get clear idea on the short-term trend and take positions accordingly. The target on a breach above Rs 30,500 will be Rs 31,500 while a decline below Rs 29,600 can target Rs 28,560. The medium-term outlook will be bearish as long as the contract trades below Rs 31,500. Decline below the significant 200-day moving average support, currently at Rs 28,562, will push the contract lower to Rs 25,400.
Silver (Rs 44,274)
The MCX silver contract has been losing momentum in its current downtrend. Last week’s fall was accompanied by low volumes which reflect a high possibility for a corrective rally. But since the trend is down, traders can go short now and go shorting it further on rallies to Rs 46,000-46,500 with a stop-loss at Rs 47,450. The target on the downside is Rs 41,400. Key short-term resistances are at Rs 46,270 and Rs 46,585. For the medium-term, Rs 40,000 will be a critical support level. Whether this support holds or gets broken will set the trend for the medium-term.
Copper (Rs 444.4)
The MCX copper has been range-bound moving between Rs 440-447 in the last week. Traders can stay back until clear signals emerge. The trend, however, is down and the contract has significant resistance at Rs 455. Fresh shortposition can be initiated if a rise from current level fails to breach Rs 455. Stop-loss can be kept at Rs 465. However, if the contract declines below Rs 440 immediately, go short with a stop-loss at Rs 447. The target for both cases mentioned above will be Rs 430. The medium-term trend in the contract is also down capable of falling to Rs 410 as long as it trades below Rs 460.
Crude oil (Rs 5,839)
The MCX crude oil contract has been consolidating sideways for the last five weeks between Rs 5,750 and Rs 6,100 within the overall downtrend. Traders have to wait for a breakout of this range to take a position. However, the short-term trend is down. Short positions can be initiated on a decline below Rs 5,750 with a stop-loss at Rs 6,150. The immediate near-term target will be Rs 5,650 and the short-term target will be Rs 5,400. On the other hand, if an immediate decline below Rs 5,750 gets averted and the contract breaches Rs 6,100, then a corrective rally to test the resistances at Rs 6,250 and Rs 6,400 is possible. In that case, traders can wait to enter short position at higher levels near Rs 6,400.
Natural gas (Rs 246.7)
The MCX natural gas has given a bullish breakout of its Rs 210-240 range and has risen sharply by 4.6 per cent last week. The outlook is bullish. Traders can initiate long positions at current levels and accumulate more long position on declines to Rs 240-235. Stop-loss can be kept at Rs 225 for a target of Rs 270. The contract has been moving in a bull channel. Last week’s breakout above Rs 240 has opened the doors for a fresh rally to the upper end of this channel. The channel resistance at Rs 270 will now be a key medium-term resistance for the contract in the coming weeks. There is a possibility for the price to turn down from this resistance.
Posted by Unknown at 8:46 AM