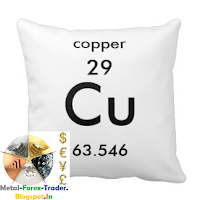 The International Copper Study Group (ICSG) has released preliminary data for the month of November last year in its February 2016 Copper Bulletin. According to preliminary ICSG data, copper production and usage data points to a marginal production deficit of nearly 25,000 metric tonnes.
The refined copper market balance for the month of November ‘15 showed an apparent production deficit of nearly 25,000 metric tonnes. The production deficit for the month, after making seasonal adjustments for global refined copper production and usage, stood at 20,000 metric tonnes. The refined copper balance for the initial eleven months of the year ended in production surplus of around 50,000 metric tonnes as compared with a deficit of around 545,000 tonnes during the corresponding period in 2014.
World refined production increased by nearly 1.6% (nearly 330,000 t) during the first eleven months of 2015. Primary production was up 2%, whereas the secondary production held steady. The refined copper production during the month witnessed significant growth of 4.0% in China. The production by the US witnessed an increase of 1.5%. On the other hand, the refined copper output by Chile and Japan dropped by 1.5% and 4% respectively. The African and Asian region recorded 3% rise in refined copper production each. On the other hand, refined output declined by 5% in the Oceania region.
The world copper mine production has increased by around 3.5% (nearly 580,000 t) during the first eleven months of 2015. Concentrate production was up 4% during the period. The mine output from Peru and Indonesia recovered during this period. The mine production by Peru-the world’s third largest copper mine producer, increased by 19%. The production increased marginally by 0.8% and 2% in Chile and the US respectively. Region-wise, Asia recorded 8% rise in production. Also South America and North America recorded 4% and 2% increased output respectively. On the other hand, Africa and Oceania region recorded production decline of 1% and 3.5% respectively.
Meantime, global usage of the metal is estimated to have declined by around 1% (nearly 260,000 t) during January to November in 2015. The Chinese apparent demand increased marginally by nearly 2%. The usage by world countries excluding China has dropped by 4%. The Russian apparent usage dropped sharply by 48% whereas the EU demand declined 4%. Japanese apparent demand too witnessed sharp decline of 7%.
Posted by Unknown at 12:00 PM