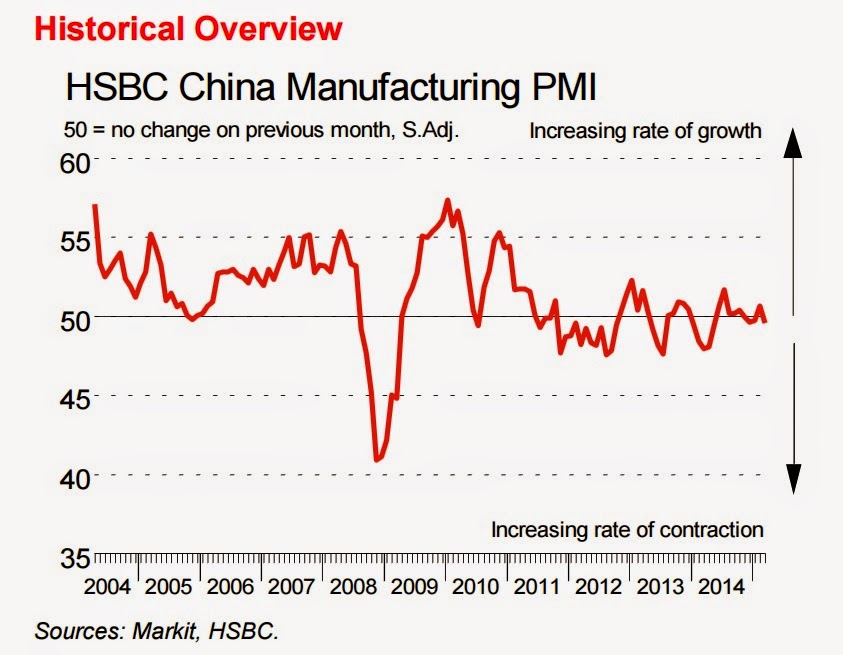 (Reuters) - Manufacturing activity in Asia's top two economic powerhouses slowed further in April, a disappointing outcome that calls for yet more stimulus and puts pressure on the United States and Europe to do more of the heavy lifting to drive global growth.
The flash HSBC/Markit Purchasing Managers' Index (PMI) for China fell to a one-year low of 49.2, from 49.6, pushing deeper below the 50-point level that is supposed to separate growth from contraction.
"The worse-than-expected PMI suggests downside risks to China's 2015 growth outlook," analysts at Barclays wrote in a note to clients.
"We believe downside risks to growth and inflation are materialising given the disappointing Q1 growth rate, and maintain our below-consensus 6.8 percent growth forecast for 2015."
The soggy outcome illustrated why the People's Bank of China
(PBOC) on Sunday cut the amount of cash that banks must hold as reserves to help spur lending.
It slashed the reserve requirements by a bigger-than-expected 100 basis points (bps).
"We continue to call for two more 50 bps reserve requirement ratio cuts and three more 25 bps benchmark rate cuts over the rest of the year," Nomura analysts said in a research report.
Hopes of yet more stimulus have helped sparked a massive rally in the local share market. The CSI300 index <.CSI300> of the largest listed companies in Shanghai and Shenzhen has risen over 30 percent so far this year.
It briefly scaled a fresh seven-year peak of 4,767.9 in the wake of the survey, but has since drifted off the high.
The report was not all bad with overseas demand picking up in April and new export work rising for the first time in three months.
A separate survey showed Japan's PMI slid to 49.7 from 50.3 in April as new orders continued to shrink and manufacturing production fell for the first time since July 2014.
Yet the rate of decline for production was only fractional and encouragingly employment returned to growth.
"Meanwhile, reports of a favourable yen/dollar rate continued to help improve price competitiveness, as companies noted a rise in new export orders for the tenth consecutive month," said Amy Brownbill, an economist at Markit.
The result is unlikely to drive the Bank of Japan (BOJ) into action. The BOJ has steadfastly maintained its outlook for a recovery that will keep the economy on track to hit the central bank's 2 percent inflation goal over time.
At next week's policy review, the BOJ is expected to hold off on expanding its already massive monetary stimulus but may lower its inflation forecasts.
All eyes are now on PMI surveys for the euro zone, with forecasts for the Markit's flash Eurozone Composite PMI centring on a more encouraging reading of 54.4, up from 54.0.
In the United States, the factory sector is expected to continue expanding in April, albeit at a slightly slower pace. The Markit's flash U.S. manufacturing PMI is seen at 55.5 versus 55.7 in March.
Posted by Unknown at 11:55 AM