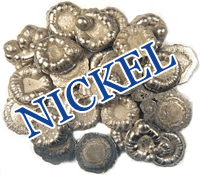 The global nickel surplus will shrink to about 20,000 tonnes this year as an export ban on nickel ore by top producer Indonesia further crimps production in China, the Lisbon-based International Nickel Study Group
(INSG) said on Wednesday.
Last year's surplus was 120,000 tonnes.
"The Indonesian export ban on nickel ore which took effect in January 2014 is expected to reduce further the nickel pig iron (NPI) production in China despite the increase in nickel ore exports from the Philippines," said the industry body.
Nickel pig iron is a low nickel content substitute for refined nickel, commonly used by Chinese stainless steel makers.
Global demand for nickel is expected to increase to 1.94 million tonnes in 2015 versus 1.87 million in 2014, according to the INSG, while output is expected to shrink to 1.96 million tonnes versus 1.99 million.
"An estimated lower GDP increase in China in line with the government goal to achieve a more sustainable and environmental friendly growth (means) primary nickel usage will continue to grow but at a lower rate than in recent years," said the Lisbon-based group.
Supplies of nickel reached glut levels in the past few years with inventories in London Metal Exchange-registered warehouses currently near their highest ever levels at more than 434,000 tonnes, according to LME data.
Posted by Unknown at 11:35 AM