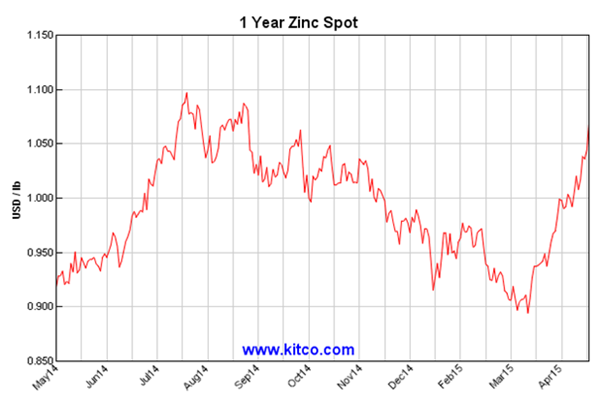 Of course it is well known that a soufflé never rises twice. However now we have a situation where the Zinc price is ringing on the doorbell for the second time in the last six months as it has burst through the key $1 per lb barrier, below which it ignominiously plunged when the oil price slump was erroneously misread as the end of life as we know it in global metals markets. Everyone now knows that was bogus thinking.
In the space of a few months in mid-2014 the metal, that suffered from chronic narcolepsy, awoke from its slumbers and rose from the low 90cts range to nearly $1.10 per lb before falling back into a swoon.
Despite this the real believers have proliferated and their enthusiasm is now being rewarded. The interesting thing is that while many may have regarded our enthusiasm as misdirected in the dark times, zinc is a metal that now has few naysayers. There is nobody out there (that we have encountered, or heard of) who would claim that there is a tsunami of zinc production or vast hidden stocks that will appear out of nowhere to mug us.
Everyone is in accord that the dark tunnel we have been through has denuded the production timetable of projects scheduled for production. We met with Alexco Silver a few weeks back and their CEO told us that people had been urging him to focus on the Zinc credits in his silver mines/deposits as that was the factor that would lower his cash costs. Likewise Chesapeake Gold has a very substantial Zinc stream potential at Metates that is icing on the cake for the rest of the project. The problem is that primary Zinc mines are now few and far between. It was interesting to note that MMG (controlled by China Minmetals) is openly talking about Dugald Rver as their next cab off the rank, after Las Bambas, which would have been regarded as a strange pronouncement only a year ago. The market is now desperate for Zinc stories that are realistic and of size.
At the time of zinc’s surge we pronounced our view that when zinc moves, it will move fast. Now that it has shucked off the fallacious story of oil as some sort of economic canary in a coalmine, it has shot from the low 90 cts area again to above the crucial $1 barrier in just a couple of weeks. We would reiterate that we would not be surprised to see it top $1.30 in 2015.
This is quite a rollercoaster ride. Buckle your seatbelts it’s going to be a bumpy ride.
Posted by Unknown at 12:30 AM