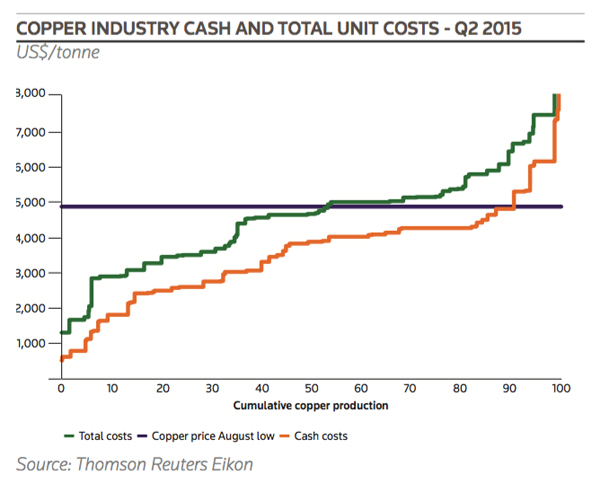 GFMS Thomson Reuter's closely watched annual base metals review and outlook contains some stark warnings for copper miners.
The industry has made progress to reduce costs – since the first quarter of 2014 average cash costs have dropped by $303 a tonne according to GFMS calculations.
Over the same period the price of copper is down by $998 a tonne. And since the end of the June quarter of 2015 (the scope of the report) copper is down another $1,000.

GFMS says at the August low of $4,888 a tonne (a six-year low visited again at the end of last month) 10% of the industry is losing money on a cash basis.

But consider total costs (a better proxy for sustaining production levels at mines) and 47% of the industry is unprofitable at a 2009 copper price.
While costs have been reduced by 8% since the start of 2014, in Q2 2015 cash costs for the industry actually creeped up fractionally over the first quarter.
The inability of copper miners to make deeper cutbacks was despite a 50% fall in the price of crude oil and a sharp depreciation of producer country currencies against the dollar (on average more than 15% says GFMS) over the period. The usual culprit when it comes to rising costs in copper mining – falling grades – were relatively stable.
And the outlook is not all that rosy for the cost curve to lower much more:
"While cash costs may benefit from the lag in the transmission of lower energy prices, it seems unlikely that the pace of cost reduction can improve much from the relatively modest pace of the last few quarters.
"If copper prices continue to languish, additional cuts in sustaining capital are likely in the coming months, which will clearly impact the future production profile. We expect noise levels to increase in the coming months as the industry announces cuts to mine production and capital budgets, but how much of that translates into mine closures and/or a meaningful reduction in volumes remains to be seen."
Posted by Unknown at 12:52 PM