On Friday, gold bulls were off to the races, spurred by a turnaround in sentiment towards commodity markets and fresh indications that a rise in US interest rates may be further off than previously thought.
On the Comex market in New York, gold futures with December delivery dates traded up as much 1.3% at $1,159.30, the highest since August 21. Gold is up 5% from where it was trading before the US Federal Reserve at its September meeting decided to hold rates steady. The last time rates were hiked was June 2006.

The week before hedge funds more than doubled net longs which now stand at just under 5 million ounces, the highest since April

Gold's leg up on Friday came after Fed minutes released yesterday suggested that the US economy will grow well below historical averages for the rest of the decade. The central bank estimates growth of around 1.7% through 2020 versus average growth of 3.1% over the past 50 years.

The dollar and gold, and bond yields and gold, have strong negative correlations and on Friday the greenback fell against the currencies of its major trading partners while treasury yields fell across the board.
Hedge funds were wrong-footed by the decision to keep interest rates near zero reducing bullish bets to more than five year lows ahead of the Fed decision.
But sentiment has now turned and according to the CFTC's weekly Commitment of Traders datafor the week to October 6 large speculators on Comex – referred to as "managed money" – added nearly a fifth to their bullish positions from the week before.
The week before hedge funds more than doubled net longs which now stand at just under 5 million ounces, the highest since April. Speculators also cut back on short positions – bets that gold could be bought cheaper in the future – reducing overall positions to 7 million ounces, down from record highs above 11 million ounces set in July.

Saxo Bank in its quarterly outlook released last week, said the "the eventual recovery in gold hinges on a change in sentiment among paper investors".
The Danish bank pointed out that most of the third-quarter rallies were driven by hedge funds covering short positions, first after the Chinese devaluation and second after the dovish Federal Open Market Committee statement on September 17. Friday's rally, in solid volumes, followed a similar pattern:
"The combination of a dovish Fed, uncertainty about China’s currency policy and the health of the global economy, as well as low investor involvement, may eventually be what triggers or forces a sentiment change. We have argued that the first US rate hike could become a buying opportunity as it would remove the uncertainty that has prevailed for many months. As we still wait for what potentially could be an elusive rate hike, some uncertainty will linger.
"But having seen three robust recoveries within a short period, we sense a change of sentiment is unfolding. Key to this would be a move above gold’s August high at $1,170/oz, which would confirm a floor has been established. We maintain our year-end target of $1,250/oz and only a break below $1,080/oz would bring a change to this outlook."
Click here for Saxo Bank's commodity insights and essential trades for the final quarter of the year. 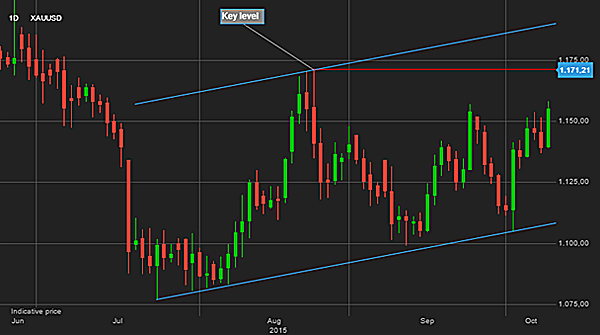