The enemy of your enemy is your... frenemy; and so it is across the Middle East as the WSJ notes the spread of The Islamic State has united many parties once at odds with each other to become 'strange bedfellows'.

Strange Bedfellows
Parties that display friction or outright aggression toward one another are finding themselves aligned in a desire to counter Islamic State.
Groups of colored lines between parties represent shared interests. 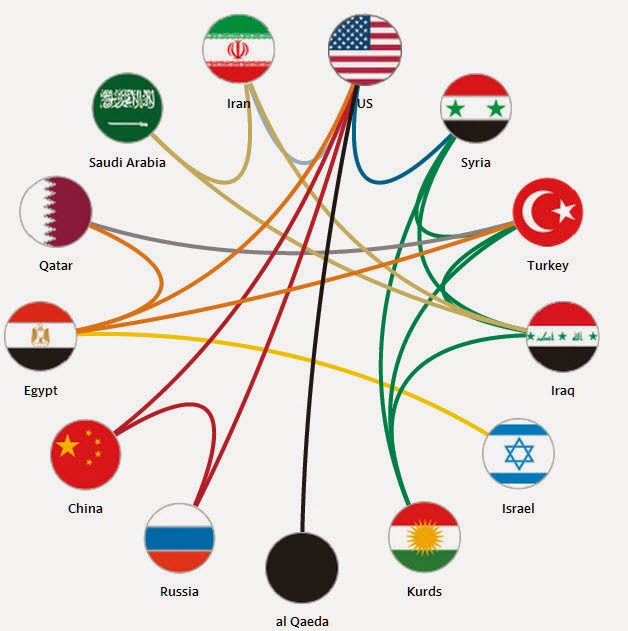 U.S. and Iran
The U.S. and Iran share an interest in fostering an Iraqi government strong enough to fend off Islamic State.
U.S. and Syria
The U.S. and Syria’s Bashar al-Assad share an interest in quashing Islamic State in Syria, even if the regime appears to put a higher priority on fighting other rebel groups.
Israel and Egypt
Israel and Egypt have come together to oppose Hamas, and they now have a similar long-term interest to do the same in confronting Islamic State.
Syria, Kurds, Turkey and Iraq
Turkey and Syria, long fearful of building up the region’s Kurds, have a shared interest in building up the Kurdish Peshmerga to combat a more immediate threat, Islamic State. Iraq has acquiesced.
Turkey and Qatar
Turkey and Qatar suddenly have a shared interest in keeping the Islamist movement they separately helped foster in check before Islamic State absorbs and consolidates it.
Iran, Saudi Arabia and Iraq
Saudi Arabia supported Sunnis in Iraq while Iran supported Shiites. They now have an interest in aiding the Shiite-led Iraq government to counter a common threat.
U.S., China and Russia
Russia and China have plenty of disputes with the U.S., but they agree that, as big powers, they are threatened in similar fashion by the expansionist Islamic extremism of Islamic State.
U.S., Egypt, Qatar and Turkey
Egypt’s military ruler sees Qatar, Turkey and the U.S. as hostile to his suppression of the Muslim Brotherhood. They all now fear Islamic State will consolidate the Islamic threat.
U.S. and al Qaeda
The greatest odd bedfellow of all: Islamic State threatens al Qaeda as well as the West, meaning that, in fact, al Qaeda and the U.S. now have a shared enemy.
Full Wall Street Journal interactive chart here...