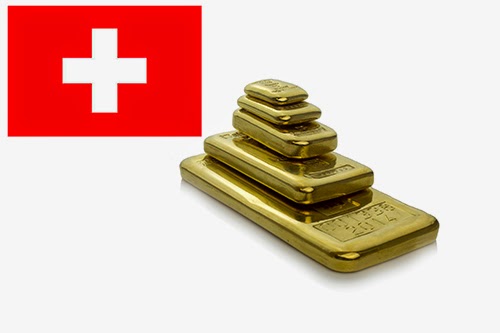 Gold on Thursday shot higher after Switzerland's central bank scrapped efforts to keep the franc from appreciating sending shockwaves through financial markets already in turmoil as a result of a stock market plunge, the oil price slide and the collapse in copper this week.
In later morning trade on the Comex division of the New York Mercantile Exchange gold for February delivery soared to a high of $1,267.20 an ounce, up $32.70 or 2.5% from Wednesday's close. Volumes were nearly double recent trading session with 23.7 million ounces changing hands by lunchtime.
Gold is now trading at its highest since September 5 and has jumped more than 7% jump so far this year. Gold has gained more than $120 from its near four-year low hit early November.

After the announcement by the Swiss National Bank ended the currency cap the franc jumped 16% against the euro and more than 30% against the dollar as traders tried to figure out the impact on global financial markets.

The SNB also entered further unchartered territory by cutting the interest rate on certain bank deposit account balances to -0.75% – that's minus three-quarters of a percent.
Marc Faber, economist, investment guru and Wall Street stalwart, came out on Tuesday this week as the year's biggest gold bull, saying a collapse in confidence in the world's central banks could see gold rallying 30% this year.
Even a sage like Faber aka Dr, Doom (his investment newsletter is called the Gloom Boom Doom Report) may have been surprised that his prediction would pan out so swiftly:
“My belief is that the big surprise this year is that investor confidence in central banks collapses. And when that happens — I can’t short central banks, although I’d really like to, and the only way to short them is to go long gold, silver and platinum,” he said. “That’s the only way. That’s something I will do.”
Posted by Unknown at 7:12 AM