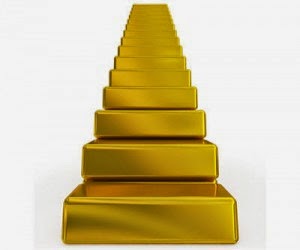 Long the top importer of gold, India fell behind China in 2013.
The decline in gold consumption came after bullion import duties were pushed up tenfold – from 1% at the start of 2012 to 10% – and other rules such as mandatory re-export of 20% of imports, transaction taxes and even curbs on ETF buying stymied India's gold industry.
Business-friendly prime minister Narendra Modi's sweeping victory has raised hopes – since dashed – of relief for the gold industry that employs more than 3 million traders and shopworkers.
Despite most of the curbs on gold imports still in place, official trade data released on Monday shows a 176% rise in gold imports from $739 million to $2 billion during the month of August.
Bloomberg quotes Shubhada Rao, an economist at Yes Bank in Mumbai as saying the big jump should not set off alarm bells over the country's balance of payments:
"We can manage with monthly gold imports of about $2 billion and the jump in the August number is largely due to last year’s low base after a sudden clamp down. The jump may look alarming, but there is no reason for panic."
July, August and September are typically gold's strongest performing months as buying from Asia increases – particularly due to upcoming festivals and wedding season in India.
Despite the huge August import numbers demand – as evidenced by premiums asked by gold traders in India above the London price – does not appear as frenzied as in 2013.
Jewellers and traders are now asking for $5 an ounce over the London price, that's down from a whopping $170 an ounce a year ago when the country's import restrictions really began to bite.
Posted by Unknown at 8:17 AM