On Friday the price of gold fell again, reaching an 8-month low after five straight days of selling on the back of negative precious metals sentiment among large investors coupled with a strong dollar.
On the Comex division of the New York Mercantile Exchange in after-hours Friday trade gold for December delivery slid below $1,230 an ounce, a 2.8% retreat for the week to levels last seen early January.
After hitting a high of $1,380 in March, gold's retreat accelerated during the third quarter with a loss of 4.5% so far in September alone. Gains since the start of the year are now less than 3%.
Bullish bets on gold – net long positions held by large investors like hedge funds – fell again last week, while bullish silver positioning all but evaporated.

On a net basis hedge funds hold 71,376 gold lots or 7.1 million ounces, half the year-high of 144,272 while open interest – a measure of market involvement – are hovering near 5-year lows.
So-called managed money now hold a neutral position in silver compared to record net longs of 240 million ounces only a couple of months ago according to Commodity Futures Trading Commission data for the week to September 9 released after the close of business on Friday.
Silver managed slight gains on Friday exchanging hands for $18.62, but still ended the week 3% lower and is not far off levels last seen in July 2010.
Silver has performed against expectations this year with many market observers calling for a rise in the price of the metal thanks to essentially flat mining supply, robust industrial buying which accounts for half overall demand and falling inventories in top consumer China.
This three-year chart of positioning in silver futures and options shows how dramatically speculators' bets on the volatile metal have swung from bullish to bearish in recent months. 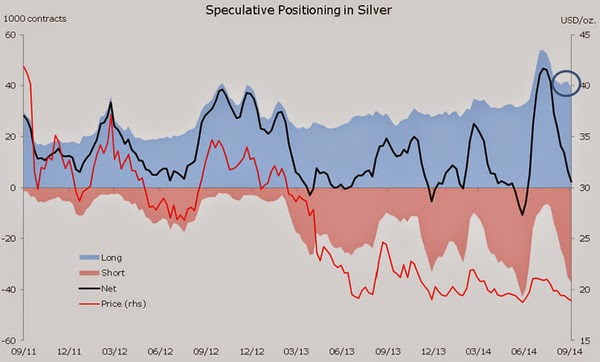