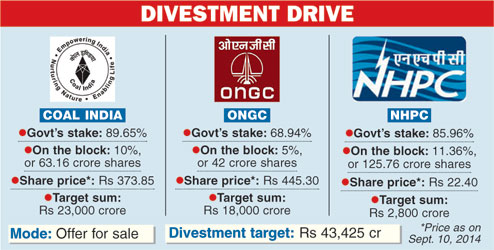 Kicking off the mega disinvestment drive, government on Wednesday approved the sale of shares in Coal India, ONGC and NHPC to garner a combined Rs 43,000 crore.
"Disinvestment proposals of ONGC, Coal India and NHPC have been cleared by the Cabinet Committee on Economic Affairs," an official source said after a meeting of the CCEA, headed by Prime Minister Narendra Modi.
At current market prices, the sale of shares in state- owned CIL, ONGC and NHPC could garner over Rs 23,000 crore, Rs 18,000 crore and Rs 2,800 crore respectively, helping the government meet its disinvestment target of Rs 43,425 crore for this fiscal.
CCEA has cleared 10 per cent stake dilution in CIL, 5% in ONGC and 11.36% in NHPC through the Offer For Sale (OFS) route, sources said.
The government has already selected merchant bankers for managing ONGC and NHPC disinvestment and is in the process for doing so for CIL.
The previous government had cleared disinvestment in SAIL and according to sources the 5% stake sale in the state-owned steel maker is likely to hit the markets this month.
The sale of 5 per cent stake or about 20.65 crore shares of SAIL at the current market price of around Rs 80.95 a piece would fetch the exchequer over Rs 1,600 crore.
The Cabinet had in July 2012 approved 10.82 per cent stake sale in SAIL. Accordingly, the first tranche of disinvestment of 5.82% was completed in March 2013. The government has missed its disinvestment target for five consecutive financial years.
In 2010-11 and 2011-12 fiscals, the government had raised Rs 22,144 crore and Rs 13,894 crore through disinvestment, against the budgeted target of Rs 40,000 crore in each year.
In 2012-13, it had raised Rs 23,956 crore, as against the target of Rs 30,000 crore. In 2013-14, the government could raise Rs 16,027 crore, as against the budgeted target of Rs 40,000 crore. The target in revised estimates was scaled down to Rs 16,027 crore.
Posted by Unknown at 10:00 AM