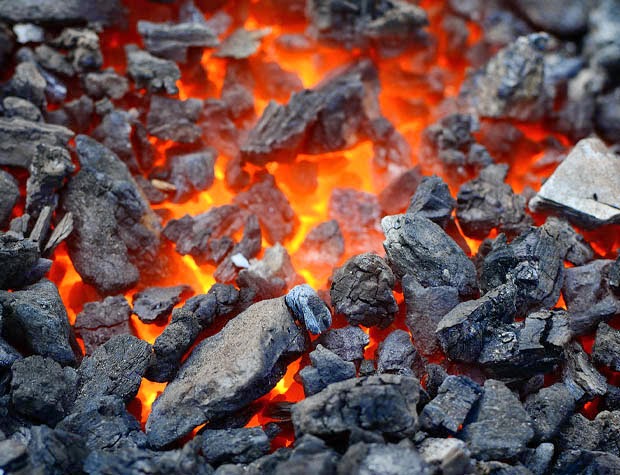 India’s highest court ruled giving away coal mines to companies since 1993 was illegal, spurring concern mining permits may be canceled and deprive power and steel projects of fuel.
The policy of allocating 218 mines for captive use to companies including Hindalco Industries Ltd. and Jindal Steel & Power Ltd. without auctioning them didn’t follow transparent norms, a three-judge bench headed by Supreme Court Chief Justice R.M. Lodha said yesterday, after a report by the nation’s main investigating agency. The court on Sept. 1 will hear arguments regarding termination of the mining licenses.
Annulment of mining rights may lead to fuel shortages at several factories, including power plants, cement and steel mills, undermining Prime Minister Narendra Modi’s aim to revive economic growth and curb blackouts in Asia’s third-biggest economy. Inadequate coal output has prompted companies to seek supplies overseas, as state producer Coal India Ltd. battles slow land acquisition and government approvals.
“The ruling has brought in uncertainty and if the situation prolongs, it could severely strain coal supplies to customers,” said Deven Choksey, managing director at K.R. Choksey Shares & Securities Pvt. in Mumbai. “I would expect the government to act on this matter in urgency and allow companies to retain coal mines on the basis of merit.”

Shares of metal and power producers tumbled in Mumbai yesterday after the ruling. New Delhi-based Jindal Steel plunged 14 percent to 253.45 rupees, the lowest close since May 13. Hindalco, the nation’s largest aluminum producer led by billionaire Kumar Mangalam Birla, dropped 9.7 percent to 164.85 rupees, the biggest decline in almost five years.
The policy of giving away coal mines to non-state companies caused a loss of 1.86 trillion rupees ($31 billion) to the state exchequer, the federal auditor said in August 2012. The Comptroller and Auditor General’s report on the estimated losses added to a series of corruption charges on the Manmohan Singh- led United Progressive Alliance government and prompted the Supreme Court to order an investigation by the federal investigative agency.
“We see significant downside for metal and power stocks if allocations are ultimately canceled,” said R.K. Gupta, managing director of New Delhi-based Taurus Asset Management Co., which oversees about $686 million. “This has the potential to hurt the India growth story as power companies are reeling under huge coal shortage.”

The ruling may bring clarity in the mines allocation process and will be beneficial to the industry in the long term, Coal Minister Piyush Goyal told reporters in New Delhi yesterday. “I hope the work to deliver coal to increase generation and reduce imports will be expedited and the court’s judgment will go a long way in helping us achieve our goal of providing 24x7 power to people.”
Jindal Steel is evaluating the impact of the ruling on the company and wouldn’t comment further, it said in an e-mailed statement. Chanakya Chaudhary, Tata Steel spokesman, declined to comment on the ruling saying he hadn’t yet seen the court order. Pragnya Ram, spokesman at Hindalco, didn’t respond to an e-mail seeking comments.
“The news is negative for Jindal Steel and Hindalco,” Kunal Agrawal, analyst at BNP Paribas Securities (Asia) Ltd., said by phone from Hong Kong yesterday. “Hindalco was expecting to get a final clearance and start mining at Mahan coal mine and for Jindal Steel it’s Gare Palma coal mine.”

Jindal Steel is also counting on a final permit for its Utkal B1 coal block that will fuel its steel project in eastern state of Odisha, the first in the country to use gas produced from thermal coal to run a steel mill. Essar Power, controlled by billionaire brothers Shashi and Ravikant Ruia, and Hindalco have invested about $3.8 billion to build power plants and an aluminum smelter to be fueled by coal from Mahan coal mines.
A panel of retired judges may be formed to probe the case, the court said in a 163-page ruling.
To increase coal production, the federal government in 1993 started allocating mines to companies for their own use. The discretionary process of allocation would later come under criticism, forcing the government to amend the mining laws and adopt a policy of auctioning coal mines. The nation has yet to auction its first coal mine.
The Coal Ministry allocated 218 coal blocks between 1993 and 2011, of which it has canceled 80 permits for failure to meet production milestones, according to the ministry.
www.bloomberg.com
Posted by Unknown at 8:37 AM