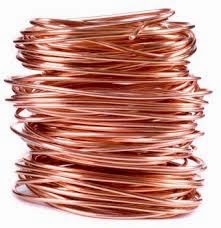 Copper prices on the London Metal Exchange have dropped over five per cent since the beginning of the year to $6,987 (₹4.22 lakh) a tonne. A major reason for this fall is the drop in demand after a scandal over financing of commodities broke out in China. Data on Chinese copper imports show sharp drop in consumption.


The scam came to light a couple of months ago and it has seen copper shipments to China drop drastically. In May, copper imports declined 16 per cent to 3,80,000 tonnes from April and last month they slipped further to 3,50,000 tonnes.
Copper prices could come under more pressure after Citigroup Inc Chief Financial Officer John Gerspach said, during the weekend, that the bank has extended $280 million (₹1,692.31 crore) as loan to non-Chinese subsidiaries of large multi-nationals at two Chinese ports, Qingdao and Penglai.
The problems have cropped up in the metals market after Chinese authorities said they were probing a commodity trading house, Decheng Mining, charged with securing loans worth $435 million (₹26,291 crore) after pledging three times over the same metal stocks in Qingdao port. The trading house has also done the same thing with aluminium.
Chinese officials suspect that some 3,000 tonnes of copper and one lakh tonnes of aluminium could have been offered as collateral several times to obtain loans.
Bloomberg reported that local authorities in China were checking metal inventories that included 1.94 lakh tonnes of alumina and 62,000 tonnes of aluminium besides copper.
At least 18 banks have lent a total of 14.8 billion yuan (₹14,400 crore) to Decheng Mining owner Chen Jihong, a Singapore national. Other banks aren’t revealing their exposure to commodity financing in China and there are fears that there could be more than one claimant for the pledged stocks.
South Africa-based Standard Bank Group Ltd has, on its part, begun investigations into potential irregularities with metals in bonded warehouses at Qingdao port.
The scandal has broken when the metals market looked to gain after copper slumped to a four-year low in March in view of China’s slowing economy. Banks and trade fear that the scandal could be deeper than initially feared.
China’s move to tighten extending credit to corporate firms is seen the reason for such a scandal. This led to commodity financing, wherein companies pledged their stocks of raw material and finished products as collateral to get loans, and rise of private lenders. In case of any default, the lenders could sell these stocks and recover their loans.
Minsheng Bank, one of the lenders, has said that its collateral ratio for the loans is 55 per cent. This means that if a borrower has offered collateral for, say, ₹1,000, the bank has given ₹550 as loan.
The scandal has resulted in liquidity problems since banks have tightened their credit norms. This can lead to problems in the market and even lead to selling pressure – a reason for copper’s struggle. Some companies which had held these inventories only for obtaining credit have begun to offload them in the market.
International lenders have cut their exposure in China and they are increasing their scrutiny on their clients from the communist nation.
The scandal has also reduced the arbitrage opportunities between the Shanghai Futures Exchange and the London Metal Exchange with the premium that Shanghai enjoyed dropping rapidly. Players in the metal market took advantage of the Shanghai premium by selling copper on the Chinese bourse and buying it on the London exchange.
But a section of trade now sees reverse arbitrage, where investors can sell on the London exchange and buy from Shanghai.
For India, this scandal will ensure lower copper prices. Firms producing copper here fix the price based on the previous fortnight on the London Metal Exchange. With prices under pressure, it is likely that the metal used for electrical and construction purposes may not see much of a rise for now.
Posted by Unknown at 7:23 AM