It's Not Just China And Oil Anymore: Here Are The Two New Concerns Weighing On Risk

While the following summary of key recent headlines suggests a broad array of issues leading to the worst start of the year since 2008...

... in broad terms, the biggest worries challenging that bull case in January were twofold: China and commodities, mostly oil. However, over the past week, two new big concerns appear to have emerged. Here, ironically, is Deutsche Bank explaining what these are (for those confused, "tightening in financial conditions in European financial credit" is a euphemism for plunging DB stock among others):

The year continues to be bruising for risk assets and recent attempts at stabilisation have been unsuccessful. After a mild rebound, equities and US credit spreads are again close to their year’s worst levels.

In addition to the initial concerns about China and energy, two new issues further weigh on risk sentiment: the slowdown in US growth momentum and the tightening of financial conditions especially in European financial credit.

Macro data in the US have been weaker than expected and have raised questions about the sustainability of the recovery. Consumer spending and the services sector, which had been the drivers of growth, have decelerated. Fundamentals there still look sound, but weakness may persist and we have revised our below consensus growth forecasts further down. The Fed turned more dovish in response to the slower momentum and market volatility, and we no longer expect a rate rise in March. Indeed, at this stage it is difficult to see the Fed hiking more than once this year.

The Fed was not alone in this dovish turn. The Bank of Japan surprised markets by cutting rates into negative territory, and we actually expect a further cut later this year. As for the ECB, more easing should be forthcoming in March. A deposit rate cut seemed like the best course of action in response to purely external risks, but if the tightening of financial conditions does not subside an increase in the size of the QE purchase programme may be necessary.

Our macro outlook for 2016 is broadly unchanged so far, uninspiring but not a disaster – but downside risks have risen both in the US and in Europe. Meanwhile, the absence of new news has moved attention away from China, but the underlying problem remains unresolved. As for oil, volatility is becoming less relevant for macro and markets.

Despite this monetary policy support, until US growth, European financial conditions, China and oil concerns are put aside, markets will remain volatile and a sustained change in risk appetite is difficult. Fundamentally, we see 15-20% upside to equities, US credit spreads fairly priced and still believe in the stronger dollar story – but risks remain for all these views.Expectations for a drift higher in rates have not materialised, and dovish central banks and lingering macro concerns will continue to delay this normalisation.

And here is the matrix breaking down all the recent conditions weighing on risk. We wish we could be as optimistic as DB that monetary support from central banks which are now running on fumes in terms of credibility, and that oil, which continues to gyrate with grotesque daily volatility, are "supportive." 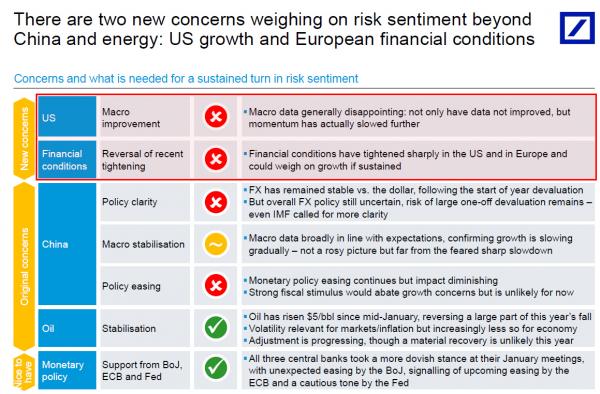 In fact, we are confused that DB is optimistic on central bank support: after all it was, drumroll, Deutsche Bank, which over the weekend warned against any more "easing" from central banks whose NIRP is now weighing on the German bank's profitability, something the market has clearly realized judging by the price of its public securities.