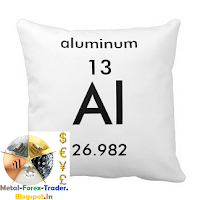 The latest report published by the World Bureau of Metal Statistics (WBMS) indicates that global primary aluminum market has recorded a deficit during the year 2015. As per the report, the market reported a deficit of 356,000 tons when matched with the deficit of 589,000 reported during entire year 2014.
The production of primary aluminum was up by 8% during the entire year when matched with the previous year. The global production rose by 4,103 kt during this period, when compared with a year ago. The total reported stock of metal has declined further by 6,000 tonnes during the month of December 2015. The stocks at the end of the year stood at 3,783 kt, which is sufficient to meet 24 days demand. It must be noted that the stock levels at the end of 2014 had stood at 5,020 kt. The combined stocks held in London, Shanghai, USA and Tokyo exchanges totaled 3,228 kt at the end of 2015, down by 1,217 kt when matched with end-2014 levels.
Global production increased by 8% during the year 2015. China, with estimated production of 31,410 kt, accounted for more than 55% of the world production. Production in the EU-28 region rose by 9.3% whereas the output by NAFTA region fell by 2.2% year-on-year. The primary aluminum production for the month of December 2015 alone was 4,502.80 kt, whereas the consumption totaled 4,441.30 kt.
The Chinese net exports of aluminum semis totaled 4,227 kt during 2015, significantly higher when matched with the exports of 3,652 kt during the year before that. The Chinese net exports totaled 342 kt during the whole of 2015 as against the exports of 313 kt in 2014.
The WBMS report also states that the global aluminum demand rose by 7.19% during 2015 to total 57.71 million tonnes, when compared with 2014. The Chinese apparent demand went higher by almost 14.2% when compared with 2014. Also, EU-28 demand ended slightly higher during January to December 2015 by 25 kt when compared with 2014.
Posted by Unknown at 4:01 PM