As investors continue to flock to gold, pushing prices to highs last seen one year ago, one major U.S. bank says it may also be jumping on the bandwagon.
Technical strategist for Bank of America Merrill Lynch, Paul Ciana, told Kitco News that the bank went long gold at the $1,089 level as the metal formed a “rounded bottom pattern” earlier in the year.
Now that the yellow metal has breached the $1,201 level, things are starting to look even more positive, he added. 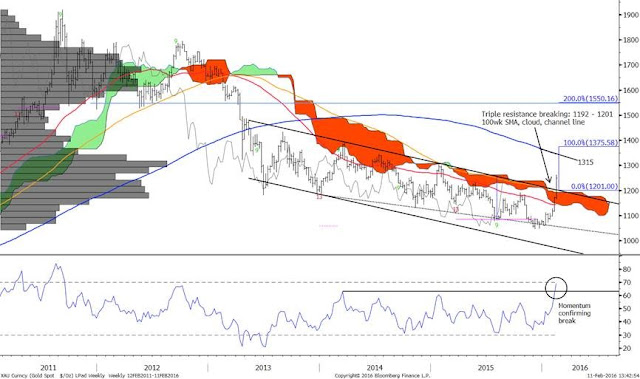 Thursday, prices rallied to levels last seen 12-months ago, with gold pushing back above $1,260 an ounce. Gold futures are up over 18% on the year, with April Comex gold settling the day up $53.20 at $1,247.80 an ounce.
“Given the fact that price action has been able to break up through resistance of $1,201, we’ve extrapolated the 200-week average to estimate an outside target of $1,315,” he said. “Our measured move projection based on the height of the channel, estimates a second target of $1,375,” he added
Ciana noted that gold may even have the “possibility” to move over $100 from there.
“We’re not making this a target but looking back at the trend over the last 5 years, there’s a large gap in the price distribution of which sometimes these gaps get filled,” he explained. “That may lead gold prices to $1,550.”
Looking at support levels, Ciana said that the under-$1,000 price tag that pundits were calling for earlier in the year ago may not be as probable given the recent upswing in gold prices.
“Sub-$1,000 was definitely a possibility 2-3 months ago, but I do not really see that as likely at this point,” he said.
By Sarah Benali of Kitco News
Posted by Unknown at 4:45 PM