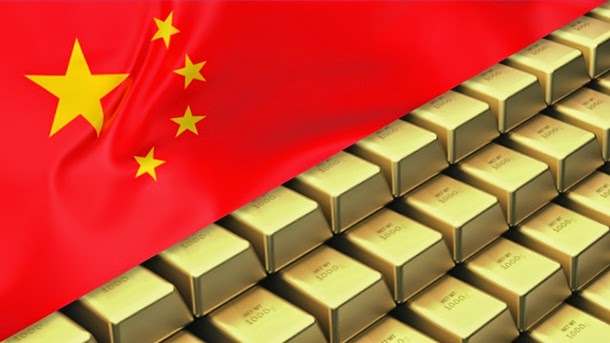 China's net gold imports from Hong Kong hit the highest in five months in September as the world's biggest consumer stocked up ahead of its National Day holiday.
Net imports from Hong Kong to the mainland 61.7 metric tons last month, the most since April,according to Bloomberg.
Total gold imports from Hong Kong totalled 91.745 tonnes, as the nation observed its annual holiday the first week of October, a time when millions of people travel and spend more than usual. It also marks a pick-up in weddings, boosting demand for gold jewellery.
When gold entered a bear market, Chinese citizens began buying physical gold in droves, pushing the nation past India as the world's largest gold consumer in 2013. But then, an anti-corruption drive by President Xi Jinping prompted fewer buyers to purchase gold bars, coins and jewellery, and imports fell.

Officially, all gold exported to China moves through Hong Kong

Many gold market observers do not believe the Hong Kong import numbers, and hold to the view that a lot of gold gets into China unreported. Officially, all gold exported to China moves through Hong Kong, although the country recently started allowing direct imports via Beijing. Sources say the move is a way to keep China's imports under the radar as it seeks to hoard gold to diversify away from U.S. Treasuries.
The country's gold reserves are officially put at 1,054 tonnes — a number officials haven't updated since 2009.
Gold makes up little more than 1% of the country's $3.6 trillion in reserves compared to more than 70% for the United States, which holds 8,166 tonnes of gold in vaults.
Posted by Unknown at 8:31 AM