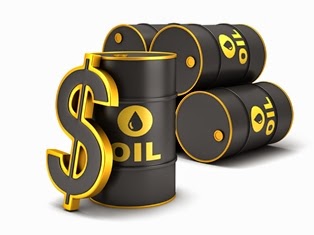 West Texas Intermediate oil fell below $90 for the first time in 17 months amid signs that supplies from Russia, Saudi Arabia and the U.S. are outstripping demand. Brent, Europe’s benchmark, headed for a bear market.
WTI futures dropped as much as 2.8 percent to $88.20 a barrel in New York, bringing the decline to 9.9 percent this year. Declines in WTI below $90 would slow U.S. production, Goldman Sachs Group Inc. said yesterday. The nation’s output will rise next year to the highest since 1970, the Energy Information Administration forecast Sept. 9.
The shale boom has turned the U.S. into the world’s largest producer of liquid petroleum, reducing its appetite for imports just as global demand growth slows. Saudi Arabia, the world’s largest oil exporter, yesterday cut its official selling price for crude to Asia to the lowest since 2008. Russian data showed the country’s output rose to a near post-Soviet era record. Kurdistan’s oil production over the next 15 months may increase by more than Chinese demand growth over the period.
“We have more than enough supply out there and demand is not catching up,” said Tariq Zahir, a New York-based commodity fund manager at Tyche Capital Advisors. “U.S. production is just incredible. Fundamentally we are just producing so much oil.”
WTI for November delivery traded at $88.73 a barrel at 12:03 p.m. in London. It’s below $90 for the first time since April 24, 2013. Futures declined 13 percent in the three months to Sept. 30, the worst quarterly performance in more than two years.
Average retail gasoline prices in the U.S. fell to $3.328 a gallon yesterday, the lowest since February, according to data from the Automobile Association.

Brent for November settlement tumbled as much as $2.61, or 2.8 percent, to $91.55 a barrel on the London-based ICE Futures Europe exchange, the lowest since June 28, 2012. It’s down 20 percent since closing at $115.06 a barrel on June 19. The grade’s premium to WTI was at $3.32 a barrel, little changed from yesterday.
U.S. crude oil production rose to the highest level since 1986 last month, while OPEC output climbed to the highest in a year. The International Energy Agency last month reduced its projections for demand growth this year and in 2015, citing a weakening economic outlook.
U.S. producers may halt rigs and low production if WTI “keeps falling below $90,” Jeff Currie, Goldman Sachs’s head of commodities research, said in an interview in London yesterday.

Saudi Arabia reduced the price for Arab Light to Asia by $1 a barrel to a discount of $1.05 to the average of Oman and Dubai crude, the lowest since December 2008. Official selling prices, or OSPs, are regional adjustments Aramco makes to price formulas to compete against oil from other countries.
The price reduction followed a cut of 408,000 barrels a day in Saudi production in August to 9.6 million a day, according to data the country submitted to the Organization of Petroleum Exporting Countries. The kingdom will maintain output at that level until the end of the year, a person familiar with its policy said Sept. 26.
“The real story seems to me to be that the Saudis want to protect their market share and not act as an OPEC swing producer, as they have done sometimes in the past,” Christopher Bellew, senior broker at Jefferies International Ltd. said by e-mail. “The excess supply of oil in the market is pressuring prices downwards again. It would be a mistake to try to call the bottom of the market.”

Kurdistan will pump 1 million barrels a day by the end of next year compared with about 320,000 barrels a day now, Sherko Jawdat, head of the natural resources committee in the Kurdish region’s parliament said in an interview. The increase of 680,000 barrels would be more than China’s 2015 demand growth, which the International Energy Agency says will be 320,000 barrels a day.
Eight of the 10 most-traded WTI options yesterday were puts, which give investors the right to sell oil at a designated price. The most actively traded were contracts to sell WTI at $80 a barrel, according to Nymex data compiled by Bloomberg.
U.S. oil consumption will decline to 18.92 million barrels a day this year from 18.96 million in 2013, the EIA said in the monthly Short-Term Energy Outlook. Demand averaged 19.4 million in the four weeks ended Sept. 19, the lowest since July 25, the Energy Department’s statistical arm said Sept. 24 in a separate weekly report.

Global demand growth slowed in the second quarter to the weakest since 2011, according to the Paris-based IEA. The adviser to 29 nations has cut its 2015 global consumption forecast by 300,000 barrels a day since July to 93.8 million a day.
“What’s pushing oil prices down is probably the steep decline in demand,” said Carl Larry, president of Oil Outlooks & Opinions LLC in Houston. “The weakness in the demand sector is causing a lot of people to sell oil.”
The EIA reduced its price forecasts for WTI in the monthly report. WTI will average $98.28 a barrel this year, down from last month’s projection of $100.45.
The share of total U.S. petroleum and other liquids consumption met by net imports fell to 32 percent in 2013 from 60 percent in 2005, according to the EIA. The rate will decline to 21 percent in 2015, which would be the lowest level since 1968.
Prices also slipped as OPEC output increased in September as Libyan output rebounded to the highest level in more than a year, according to a Bloomberg survey. Production from the 12-member group rose by 413,000 barrels a day to 30.935 million, the survey of oil companies, producers and analysts showed.
OPEC has yet to decide to cut its production target, the United Arab Emirates’ energy minister said on Sept. 23. All 12 members of the group must agree before any reduction in its official limit of 30 million barrels a day, the U.A.E.’s Suhail Al Mazrouei said, a week after OPEC’s secretary-general said it may lower the ceiling in 2015.
Posted by Unknown at 6:19 PM