Will the Fed turn off the QE tap? We'll find out Wednesday 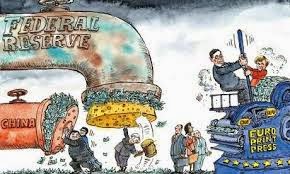 Precious metals markets could be in for a wild ride this week, with the US Federal Reserve expected to wind down its third installment of quantitative easing. (QE)
The two-day Fed meeting starts Tuesday and at its conclusion, investors will know whether or not the central bank, led by chair Janet Yellen, will end the bond-purchase program that has been responsible for fuelling US stock markets, keeping interest rates low, and most important for mining – keeping the prices of precious metals buoyant since the program began in 2008.
Last December, on signs the US economy was moving out of recession and no longer needed as much economic stimulus, the Fed began winding down its monthly bond purchases from $85 billion, to its current $15 billion.
While an announcement to end QE would almost certainly be negative for gold and silver, and US equities that have become dependent on the low-interest-rate environment, there are signs that now may not be the best time to "take away the punch bowl" of cheap money. Fears of deflation, slowdowns in Europe and China are three of the biggest reasons for a possible continuation of QE. A raft of negative news this month has also roiled stock markets, ranging from unrest in Hong Kong to Iraq to Ebola.
Two weeks ago James Bullard, head of the St. Louis Fed, said the Federal Reserve should continue with asset purchases until the US economy shows more strength, telling Bloomberg TV: "We can go on pause on the taper at this juncture and wait until we see how the data shakes out in December."
The UK Observer pointed out that "midterm elections next month could see the Democrats lose control of the Senate and break an uneasy truce over economic policy. So the Fed may be only be a few meetings away from declaring that the US needs more QE and find itself delaying a rise in rates. More cheap money would cheer stock market investors."
Others at the Fed, however, think the central bank will stay the course. Boston Fed president Eric Rosengren suggested that when the Fed meets Oct. 28-29, it will likely end the program, unless US employment data looks poor enough for the Fed to consider changing its mind.
Whether or not the Federal Reserve chooses to continue easing, it seems almost certain that Europe will open its QE taps.
"Figures next month are expected to show the eurozone contracting in the third quarter following stagnation in the second. Eventual ECB action looks inevitable," says the Observer.
Earlier this month, the European Central Bank started purchasing French bonds in an attempt to revive the flagging eurozone.
The Fed has a habit of delaying difficult and market-moving decisions when it comes to QE. It certainly will be interesting to see which direction it decides to go and how the markets react.
Posted by Unknown at 9:41 AM