These are the most bullish gold price charts you'll see today

Amid a fresh sell-off on US equity markets (third down week in a row) and another crude oil rout (down 9.6% for the week), gold managed a small gain on Friday with April futures finding a thin cushion against the crucial $1,150 an ounce level.
Gold's resilience is all the more remarkable since it's been into the teeth of a rabid dollar. Gold historically has inverse relationship to the value of the USD and on Friday the greenback jumped back above the 100-mark against the world's major currencies to the highest since early 2003.
That compares to a record low of 71.6 in April of 2008 and a record high of 164.72 in February 1985 when the price of gold bottomed at $284.25 an ounce. The first chart from a new research note by Julian Jessop, Head of Commodities Research Capital Economics, shows just how big a gap has opened up between the dollar and the gold price.
While the two do diverge from time to time (look at the pattern at the height of the global financial crisis) all things being equal you could expect gold to be trading closer to $400 an ounce at the moment. That supplies plenty of upside for gold once the dollar retreats from its lofty heights, which eventually it will. 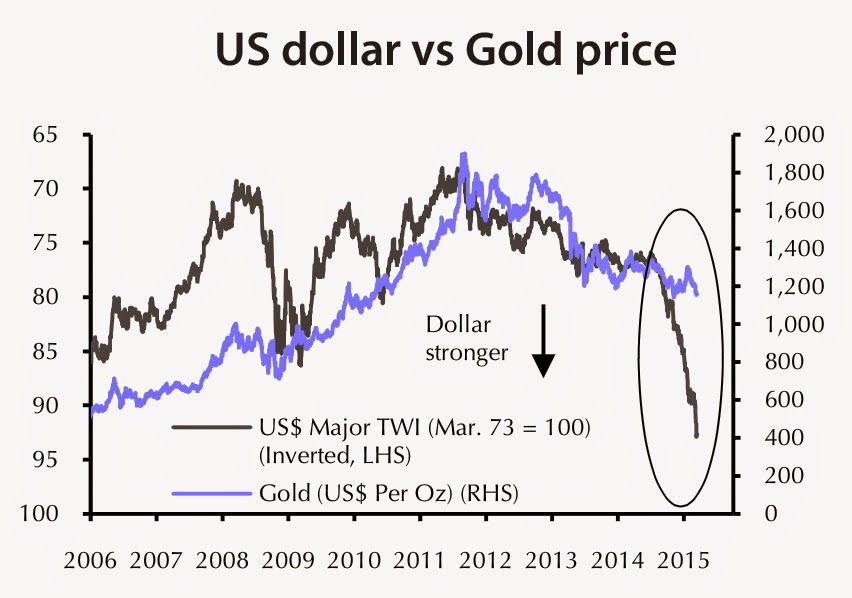 An even closer negative correlation exists between the gold price and US inflation-adjusted interest rates (Treasury Inflation Protected Securities or TIPS).
Some analysts go so far as to say that the correlation is so strong that the gold price can be used as a predictor of interest rates, serving as an early warning system of both the direction and magnitude of the move in rates.
The underlying reason for the relationship is that as US yields rise – as is widely expected – the opportunity costs of holding gold increases because the metal is not income producing. The expectations of higher rates in the US is also a major factor behind the surging dollar.
Taking chart number two at face value, the eventual return of US real yields to more normal levels of around 2% would be consistent with the gold price falling back below $1,000 per ounce. But real yields have remained stubbornly low and the second chart would suggest gold should be scaling $1,400 right now.
A level which Capital Economics predicts we'll reach by the end of the year. 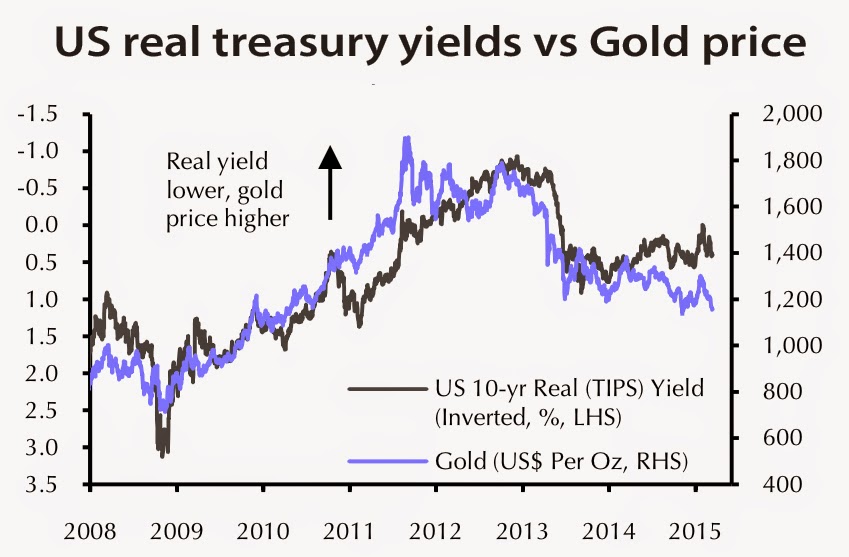